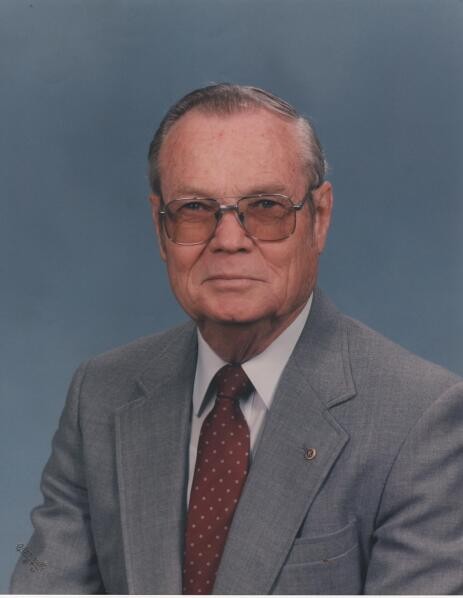 D onald LeRoy McFall, 95, of Sabetha, Kansas went to his eternal home on Tuesday, June 22, 2021.  He passed away peacefully in the care of his children.  Don was born on February 2, 1926 to Henry Elroy and Abbie Cleo (Bell) McFall at Oneida, Kansas. The family moved to New Mexico in 1936 for his sister Nadine's health.  He graduated from Deming High School in Deming, New Mexico in 1944 and moved to Sabetha immediately following his graduation.

On August 10, 1951, he was united in marriage to June A. Burwell in Lewisburg, West Virginia.  Four children were born to this union. In September of 1944, Don became a parts man and bookkeeper for Cook/Jones (Ford) Motor Company. Don bought the Ford dealership in 1954. He ran the dealership until 1979 when he sold the business to Eldon Aberle.  He retired and traveled with June until her death in 1986.  Don married Marjorie Priest Strahm on November 23, 1996.  Marjorie passed away in 2013.  He moved to the AC apartments in 2015.

Don loved cars and cards.  He enjoyed collecting and working on antique vehicles and sharing them with others.  He drove his cars in the Old Albany Days, the rodeo, and homecoming parades with the queen candidates.  In his later life and at the AC home, Don enjoyed all kinds of card games, assembling puzzles, and playing pool with his friends.  He also liked to play miniature golf, horseshoes, bowling, and snooker.

Don was a long-time member of the First United Methodist Church of Sabetha.  He belonged to Kiwanis for over 50 years during which time he served as president, among other offices.  He served as the president of the USD 441 school board.  As a Ford dealer, he sponsored the Punt, Pass, and Kick competition for many years.  He liked hunting rocks and Indian artifacts with his wife June.  They traveled to the southwest every winter and enjoyed camping there.  He was well known around the community for his service to others.

A Celebration of Life will be held Friday, July 2, 2021 at 2:30 p.m. at the Sabetha United Methodist Church in Sabetha, Kansas.  A visitation will be held starting at 1:00 p.m. prior to the service.  Burial will be held at a private family ceremony later. In lieu of flowers, memorial contributions may be made to the Sabetha United Methodist Church or the Nemaha County Home Health and Hospice sent in care of Popkess Mortuary, 823 Virginia Street, Sabetha, Kansas 66534.

To order memorial trees or send flowers to the family in memory of Donald McFall, please visit our flower store.