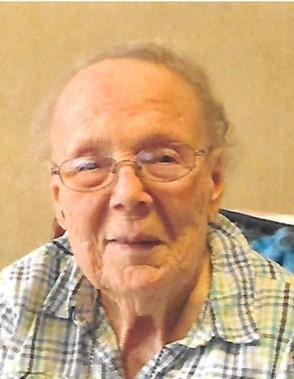 Eldred was born June 15, 1921 to Herman Henry Zwahl and Maggie (Hall) Zwahl at their home northwest of Wetmore, Kansas.  Eldred was the oldest of four children born to this union.

After her high school graduation, Eldred obtained an extra year of schooling so that she could teach school.  She taught at various schools in the rural areas of Nemaha County in Kansas for six years.  Desiring more social activity, Eldred quit teaching and started doing clerical work for Santa Fe Railroad in Topeka, Kansas.

Eldred met Ed Pfrang through her aunt and uncle. When Ed left for World War II, Eldred wrote letters to Ed for three years while he was overseas.  On February 9, 1949, five years after Ed’s return from the service, Ed and Eldred were united in marriage.  After her marriage to Ed, Eldred dedicated her life to the farm and her family.  She did everything she could to help on the farm.  She drove tractors and trucks, helped fill silos, loaded and unloaded small bales in the hay loft, fed cattle, and helped with the hog chores.  But, she still made time for taking her children to swimming lessons, dance lessons, piano lessons, baseball games and practices, 4-H, and helped them with their homework. She sold eggs for extra income and canned everything from their garden and orchard.  They didn’t have running water until 1956.

Ed and Eldred were married for 69 years, living on the same homestead which was located west of Woodlawn.  In the spring of 2018, Ed and Eldred moved to Medicalodges of Jackson County in Holton, Kansas.  After Ed’s death in 2018, Eldred moved to the Apostolic Christian Assisted Living in Sabetha, Kansas.

Eldred’s contagious chuckle and laughter will be missed by all of those who loved her!

To order memorial trees or send flowers to the family in memory of Eldred Pfrang, please visit our flower store.