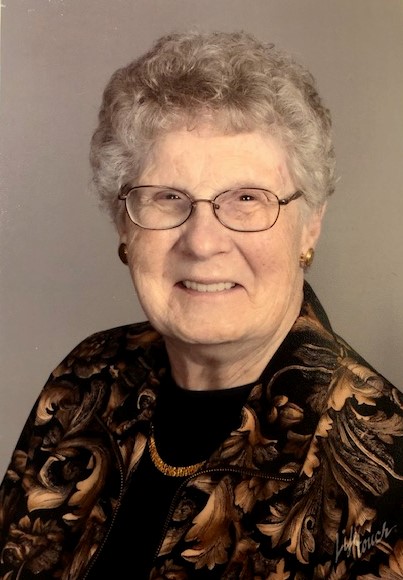 H elen Marie (Snyder) Skinner, 87, of Hiawatha, Kansas passed away on Wednesday, June 30, 2021, at the Apostolic Christian Home in Sabetha surrounded by her family.

Helen was born on June 3, 1934 in Fairview, Kansas to Bernard J. and Helena E. (Riemann) Jurgensmeier.  Helen was a lifelong resident of Brown County in Kansas and made her home in either Fairview or Hiawatha, Kansas during her lifetime.  She attended school in Fairview and graduated from Fairview High School with the class of 1952.  She was united in marriage to Douglas Milton Snyder on January 20, 1953 at St. Augustine Catholic Church at Fidelity, Kansas and five children were born to this union.  Doug and Helen moved to Fairview in 1973.  They owned and operated the Eat-N-Time restaurant in Fairview from 1975 until 1989 when Doug passed away.  On March 2, 1992, Helen married Charles “Chick” Skinner of Fairview.  They lived on the Skinner farm south of Fairview until Chick passed away.

Helen enjoyed listening to music, baking cookies, playing (very serious) card games, playing bingo, watching the Kansas City Royals, Kansas City Chiefs, and KU basketball.  She loved spending time with her 11 grandchildren and 14 great-grandchildren.  They always brought a smile to her face and she loved her family.  Her love of ice cream was evident as well because in her eyes, “no matter how full you were, there was always room for ice cream” and whenever you went for a visit homemade cookies were enjoyed by everyone.

Helen was preceded in death by her parents; her husbands, Doug on July 20, 1989 and Chick on October 13, 2012; her four brothers, Raymond, Leo, Eugene, and LeRoy Jurgensmeier; and one sister, Bernice Newman.   She is survived by her five children, Sherry Hartter (Dick Kidwell) of Trimble, Missouri; Virgil (Becky) Snyder of Jessieville, Arkansas; Mary (Mike) Patton of Hiawatha, Kansas; David Snyder of Olathe, Kansas; and Dan (Lisa) Snyder of Sabetha, Kansas; three sisters, Evelyn Suther of Wetmore, Kansas, Viola Peters of Shawnee, Kansas, and Lois Bindel of Sabetha, Kansas; her 11 grandchildren; and her 14 great-grandchildren.

Mass of Christian Burial will be Tuesday, July 6, 2021 at 10:00 a.m. at the St. Augustine Catholic Church at Fidelity, Kansas.  A parish rosary will be recited Monday, July 5, 2021 at 6:00 p.m. at the Popkess Mortuary Chapel in Sabetha with visitation to follow until 8:00 p.m.  The interment will be made in the St. Augustine Catholic Church Cemetery.  Memorial contributions may be made to the Fairview Community Development Association (FCDA) sent in care of Popkess Mortuary, 823 Virginia, Sabetha, Kansas 66534.

To order memorial trees or send flowers to the family in memory of Helen Snyder Skinner, please visit our flower store.