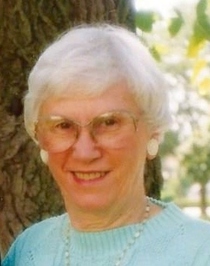 Ada Aeschliman passed from this life into the arms of God February 22, 2015 at the Apostolic Christian Home in Sabetha, Kansas.  Ada was born in Sabetha on May 6, 1919 and spent a majority of her life in the Sabetha community with the exception of time spent in Centrailia and Seneca while husband Charles pastored churches in those localities.

Ada Louise was one of five children born to John and Nina (Lynn) Reinhardt. Her brothers, Eugene, John Julius, Mark, and her sister Alice Troxel all preceded her in death.

Ada was educated in the Sabetha school system and graduated from SHS in 1939.  During her high school years Ada was a cheerleader and active in sports. During her high school years and several years after graduation Ada was employed at Greene’s Drug Store in Sabetha.  After a brief courtship Ada married Charles Aeschliman in a sunrise service August 31, 1941.  Ada was a homemaker until the children were grown, then worked at the Seneca Hospital as a nurse’s aide, and the Apostolic Christian Home in Sabetha.

Charles and Ada moved to Cobblestone Court in July 2009 until health concerns required Ada’s move to the Apostolic Christian Home in June 2014.

A celebration of life service will be held Saturday, March 21, 2015 at 10:30 a.m. at the NorthRidge Church in Sabetha.  A visitation will be held on Saturday morning 9:30 a.m. to service time at the church.  Memorial contributions may be made to NorthRidge Church or Nemaha County Home Health and Hospice  sent in care of Popkess Mortuary, 823 Virginia Sabetha, Kansas  66534.

To order memorial trees or send flowers to the family in memory of Ada Aeschliman, please visit our flower store.