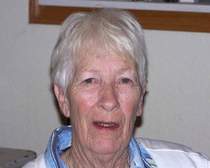 On May 29, 1949, she married George P. “Butch” Grauer. In her younger years, she worked at the Wagon Wheel in Marysville and was a member of the Eastern Star. She was an avid gardener and loved to shop for antiques. Her greatest joy was her grandchildren and great-grandchildren.

To order memorial trees or send flowers to the family in memory of Alberta "Red" Grauer, please visit our flower store.