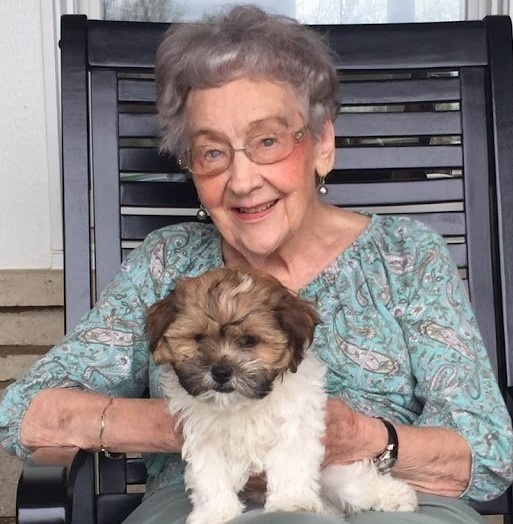 A lice Annabelle Colyn, daughter of Sam and Olive Martin Weir took her last breath on October 22, 2021, surrounded by family.  Just 24 hours before, she was choosing her favorite candy from the jar after winning a bingo game in the activities room at the Apostolic Christian Home, where she lived the past three years.  Alice was 93 and looking forward to her birthday on December 21, but the good Lord decided she would celebrate that one in heaven with her husband, John and her daughter Lori Dawn and one other child she never got to meet.

Circumstances led to an interesting life for Alice.  She was the fourth child born on an Iowa farm and met “Colyn” on a double date and from that moment on they were a team.   Prior to that Alice taught one year at Willow Street School before attending Northwest Missouri State Teacher’s College. John received a scholarship to play football and basketball at McPherson College in Kansas.  When he asked Alice to go with him, she replied, “Well, not unless we’re married.”  So, in 1947 Alice Weir became Alice Colyn and the adventure began.

Over the years, her devotion to John and his adventuresome spirit took them to live in Yosemite National Park in a two room tent for two summers, then off to Connecticut to the National Audubon Society for one year and finally five summers in Rocky Mountain National Park.   Alice was willing to do what it took, such as cooking on a wood stove and storing her refrigerated items in a “bear baffle,” to make a happy life for John and her children.  These adventures made lasting memories for all their children.

McPherson was their home except for one year spent in Mesa, Arizona, where they both continued their teaching careers.  Their one year in Mesa proved to be the most important move in their lives, as that is where they got involved in a church, which helped them learn to know Jesus in a personal way.  They jumped right into evangelism by signing up to be lay witness missionaries with Campus Crusade for Christ and later many years with Gideon International.  From that time on, telling other people about Jesus became a focus for her. After a move “home” to McPherson, Alice continued her 24 year teaching career in Lindsborg, Kansas.  In 1990, John and Alice retired from teaching and moved to Sabetha, Kansas, to be near family.  They continued to travel to see the wonders of God’s creations in nature.

Alice was an avid birder, as was John, and could name most every bird she saw and even could identify birds by their call.   Over the years, Alice nurtured and raised numerous “wild” pets, like Sweet Pea the skunk, Herk the Swainson’s Hawk and Cynthia, the boa constrictor.

A celebration of her life will be Tuesday, October 26, 2021 at 10:30 a.m. at her church, the NorthRidge Church in Sabetha, Kansas.   Prior to the service, the family will visit with friends starting at 9:30 a.m. until service time at the church.  Memorial contributions may be made to the NorthRidge Church or the Greater Sabetha Community Foundation and sent in care of the Popkess Mortuary, 823 Virginia, Sabetha, Kansas  66534.

To order memorial trees or send flowers to the family in memory of Alice Colyn, please visit our flower store.