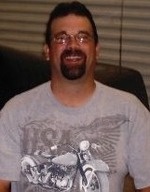 He was born November 17, 1968 the son of Timothy and Karen Unger Gottschalk at Colby. He graduated from Garden City High School in 1987. In 1998, while working for Sears he met the love of his life, Christina Gallaway.  This was not an easy task though.  Andy would conveniently find himself at the places Christina would frequent.  She finally, after much persuasion, agreed to a date with Andy, and the rest is history!!  They lived together in Garden City for two years, before moving to Centralia KS.  Andy began work for Joe Mitchell Appliance in 2000 and then worked for Eisenbarth Plumbing for 10 years. He recently opened the T & A Tavern in Centralia with his step-son, Tylor.

Andy is survived by his parents of Garden City; his wife, Christina Gallaway; two step-sons, Tylor and Seamus Gallaway, both of Centralia; a daughter, Kaitlin Gottschalk, Centralia; and a  sister, Nicky Unger, Garden City.

A memorial service will be Saturday, October 23, 2010 at 11:00 a.m. at the shelter house at Centralia Lake.  Greg Keffer will officiate.  Inurnment will be in the Valley View Cemetery, Garden City, at a later date.

In lieu of flowers the family requests memorial donations to the Andy Gottschalk Memorial Fund and sent in care of the Hayes-Popkess Funeral Home, Centralia.


To order memorial trees or send flowers to the family in memory of Andrew Gottschalk, please visit our flower store.