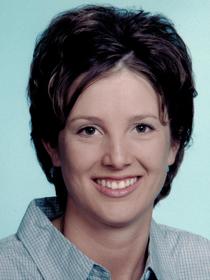 Angela (Angie) Linn (Aue) McGuire gracefully and peacefully ended over an eight year struggle with cancer on her thirty-eighth birthday, August 30, 2014, when she died at the Sabetha Hospital surrounded by loved ones.

Angie was born to Weldon and Joni (Dawson) Aue of Morrill, KS, on August 30, 1976.  She graduated from Sabetha High School in 1995, and after high school graduation she attended Highland Community College, receiving her associates in journalism.  She then graduated in 2000 from Missouri Western State University with a BS in social work. She worked for two years after graduation as a case manager for The Farm in Leavenworth, KS.  In 2002, she began employment with Big Brother Big Sisters (BBBS) as a case manager.  She continued to be employed until the time of her death as the Executive Director of BBBS of Brown and Nemaha Counties. During her years of service to BBBS, she received the 2012 Silver Star Award for outstanding match support and growth in children served; along with her dad Weldon, the Sandy Huning Community Builders Award; and the award she most coveted was having Big Brother Michael Stevens receiving the Big Brother volunteer of the year for 2009-2010.

She was preceded in death by her maternal grandparents, Stanley and Lucille Dawson.

In spite of the health challenges that Angie faced, she never lost her zest for life, her positive attitude, and her insistence on helping the young people that she served in BBBS. She was a devoted daughter, sister, wife, and aunt.  She especially loved entertaining her nieces and nephews and her dog, Jake.  She enjoyed Rodney Atkins' concerts, KU basketball, fishing, gardening, and most of all spending time with her husband, family, and good friends.

A visitation will be held at Sacred Heart Catholic Church in Sabetha, KS on Tuesday evening, September 2 from 5:00 to 7:30. The funeral service will be at the United Methodist Church of Sabetha on Wednesday morning, September 3, 2014 at 10:30.  The interment will be made in the Albany Cemetery north of Sabetha.  A memorial will be established at a later time sent in care of Popkess Mortuary 823 Virginia Sabetha, Kansas  66534.

To order memorial trees or send flowers to the family in memory of Angela (Angie) McGuire, please visit our flower store.