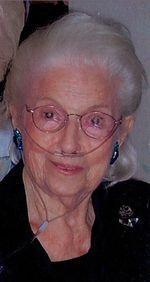 Anna Louise Bailey was born on March 31, 1920 the daughter of Walter Cecil Wagner and Cecile Mae Ishmael-Wagner at Grundy County, Missouri. She was one of five children. Anna married Earl Nolan Bailey on January 1, 1938 in Trenton, Missouri. Two children were born to this union. Anna was a homemaker and was active with Earl in the farming communities of Nemaha county in Kansas and Richardson county in Nebraska. Anna was a member of the Trinity Church of the Brethren.


Anna is preceded in death by her parents, Walter and Cecile Wagner, her sister, Fern Warner-Eicher, two brothers, Gene Wagner and James T. Wagner. She is survived by her older brother, Donald Wagner of Kansas City, Missouri.


Graveside services will be held Saturday, July 31, 2010 at 2:00 p.m. at the Sabetha Cemetery. The family will greet friends Friday evening from 6:30 to 8:00 p.m. at the Popkess Mortuary Chapel in Sabetha. Memorial contributions may be made to the Sabetha Manor or the Nemaha County Home Health and Hospice sent in care of the funeral home.

To order memorial trees or send flowers to the family in memory of Anna Bailey, please visit our flower store.