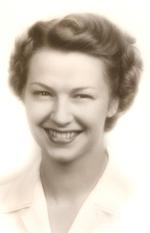 A nna Mae Bingman, passed away on Friday, January 11, 2013, at the age of 92, peacefully at the Apostolic Christian Home in Sabetha, Kansas. Born on a farm near Fidelity, Kansas on December 31, 1920, Anne was the youngest child of Joe and Rose Bockenstette. If you had the privilege to know Anne, you knew that she was a feisty and fun lady.

Anne, with her spunkiness and fire was perhaps defined by being the youngest; perhaps it was the fact that she had her six-foot tall daddy wrapped securely around her little finger, probably to the consternation of her “all business” mother, Rose. Perhaps it was her childhood and teenage involvement in the family “Blue Ribbon Hatchery” business located just west of Sabetha that helped develop her strong sense of “can do” attitude.

Those years just prior to World War II found her as a “force of nature” when involved in the hatchery bookkeeping or whatever else she set her mind to. She often spoke of cooking noon meals for all the workers at the big oak table in the family home. It is likely that she valued the smile on her dad’s face the most of all the contented diners.

In the late 1930’s, following graduation from Sabetha High School, Anne headed east to work for a time at her sister Edith’s hatchery in Dayton, Ohio. Upon her return to Sabetha following the war’s end, she cajoled her dad into allowing her to take flying lessons at the Hiawatha airport. Her handsome young instructor, recently returned from piloting B24’s over the “Hump”, was apparently fascinated with this spitfire of a girl. Fascinated enough that once airborne, he asked her for a date and told her he’d fly the Piper Cub upside down if she didn’t say “Yes”!

Anne did allow that young pilot Harry “Bing” Bingman to take her out and not so many months later, on November 30, 1946, the couple became man and wife. Harry worked for Anne’s dad in the farming operation and she continued her involvement in the hatchery. Their three children, Vianna, Phillip and Linda joined the family in the first half of the 1950’s, and the family was busy with the farm, cattle, horses and life.

Anne and Harry each independently came to a point in life where they trusted their eternal destiny and salvation to faith in Jesus Christ. They worshiped as a family and were members of the Congregational Church (later to become NorthRidge Church) in Sabetha. They raised purebred Angus cattle and farmed west and south of town. Almost any stray or injured animal was welcome in Anne’s home, with several becoming family pets. Anne was the secretary for the Sabetha Chamber of Commerce for many years while Bing carried mail to the patrons of Rural Route #3. They were members of the local flying club and charter members of the Sabetha Saddle Club. They enjoyed traveling and eventually spent many winters in the Texas Rio Grande valley.

Anne was preceded in death by her parents, Joe and Rose Bockenstette, her siblings Edith (Bockenstette) Steinman and Curtis Bockenstette as well as Harry Bingman, her loving husband of 66 years.

To order memorial trees or send flowers to the family in memory of Anna Bingman, please visit our flower store.