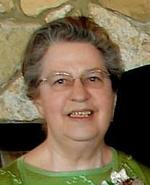 A rleta Ruth Wenger, 79, of Sabetha passed away peacefully at the Apostolic Christian Home on Tuesday, January 1, 2013, where she had been a resident for the past year.

She was born December 19, 1933 in Sabetha, Kansas to Emil and Mary (Burger) Aberle.  She grew up in the Albany area with her five sisters and one brother; Rosalie Lohman, Frances Aberle, Carol Mabie, Irene Aberle, MaryAnn Reiger and Marvin Aberle.  She attended Albany Grade School and graduated from Sabetha High School with the class of 1951.  Arleta worked at Buzz Café, Wenger Mfg. as a secretary, and later at Sunny Fabrics.  While employed at Wenger Mfg. she met her husband, Harvey Wenger, who was employed there as well.  They were united in marriage on Easter Sunday, April 1, 1956 and were blessed with seven children; Mary Kay Wenger, Julie (Frank) Krogmann, Wayne (Jean) Wenger, Janice (Roger) Young, Valerie (Curtis) Keim, Dan Wenger, all of Sabetha and Lana (Eldon) Kaster of Bern, Kansas. Arleta was a long time member of the Apostolic Christian Church in Sabetha.  She enjoyed gardening, sewing, cooking and cherished the time spent with her grandchildren and great-grandchildren.  She will be dearly missed by all.

Funeral service will be held Friday morning, January 4, 2013 at 10:30 a.m. at the Apostolic Christian Church in Sabetha.  The family will greet friends Thursday evening from 6:30 to 8:30 p.m. at the Popkess Mortuary in Sabetha.  Interment will be made in the Albany Cemetery.  Suggested memorial contributions may be made to the Sabetha Hospital or to the Apostolic Christian Home, sent in care of the funeral home.

To order memorial trees or send flowers to the family in memory of Arleta Wenger, please visit our flower store.