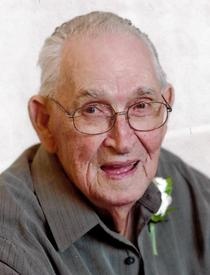 He was born October 28, 1919, the son of Lester and Jennie (Kemplay) Cottrell south of Corning, Kansas.  He attended a rural one-room school house and graduated from Corning High School in 1938.  He participated in basketball, football and track.  After high school he helped his parents with the farm. He then went to Topeka where he worked for Topeka Transfer and Storage and ButterKrust Bread.  He was drafted in January, 1942, in the 1 st group of Nemaha County draftees.

Arthur served in the WWII European Theater until the end of the war.  He was assigned to the 90 th Division, Company M, 357 Infantry and was a “Tough Ombre”.  He landed at Utah Beach on D-day and was involved in various campaigns including the Battle of the Bulge.  During his time as a soldier, he was temporarily assigned as a driver for George C. Patton.  He was the recipient of a Bronze Star twice during the war.  He was honorably discharged in December 1945.

He married Esther Brenner at the Methodist Church parsonage in Centralia, Kansas on January 6, 1946.  They purchased their farm in 1950.  It was their lifelong home.  Esther preceded him in death in 2009.

Arthur enjoyed many things.  He loved farming, gardening, fishing, woodworking and telling stories.  He was a proud lifelong member of the Corning community.  Most of all, he loved his family and marveled at each new baby.  He co-owned and operated Cottrell Lumber Company for 25 years.

Art was preceded in death by his wife, Esther; his parents, Lester and Jennie (Kemplay) Cottrell; and two brothers, Bermin Cottrell and Marvin Cottrell.

Funeral service is Saturday, March 7, 2015, at 10:00 a.m. at Corning Trinity United Methodist Church in Corning, KS.  The family will greet friends Friday evening, March 6, 2015, from 6:00 – 8:00 p.m. at   Popkess Memorial Chapel in Seneca, KS.  Interment will be in America City Cemetery with Military Honors conducted by Corning American Legion Post #37.  Memorial contributions can be made to the Arthur W. Cottrell Memorial Fund, sent in care of the Popkess Memorial Chapel, 814 Castle St., Seneca, KS 66538.  A specific charity will be named at a later date.

To order memorial trees or send flowers to the family in memory of Arthur Cottrell, please visit our flower store.