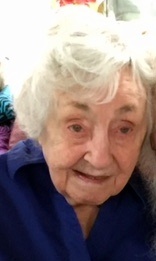 S arah Beatrice “Bea” (Guffey) Brunke, 94, formerly of Topeka, KS passed away Sunday, May 13, 2018 at the Apostolic Christian Home in Sabetha where she was a resident since 2008.

Beatrice was born in Rogers, Arkansas on October 7, 1923 the daughter of Frank and Violette (Woodard) Guffey. She spent her early years on a farm in rural Kansas in the Hoyt, Kansas area. In later years her family moved to Topeka where she attended East Indianola Elementary School. In 1941 Beatrice graduated from Seaman High School.

She worked as a secretary at Miller Studebaker Insurance until they sold the business. By 1963 Beatrice had worked her way up to the position of Office Manager.

Beatrice married Kurt Brunke in December of 1963. He was a PGA golf pro at the Topeka Public Golf Course and Cedar Crest Country Club. He retired in 1983.

She is survived by two grandsons, Matthew (Janelle) Popkess of Sabetha, KS, and Ed (Carolyn) Popkess of Topeka, KS; and four great grandchildren.

Memorial gathering will be Tuesday, May 22, 2018 from 2:00 – 3:00 p.m. at the Davidson Funeral Home in Topeka, KS.  Inurnment will be private at the Prairie Home Cemetery.  www.davidsonfuneral.com

To order memorial trees or send flowers to the family in memory of Beatrice Brunke, please visit our flower store.