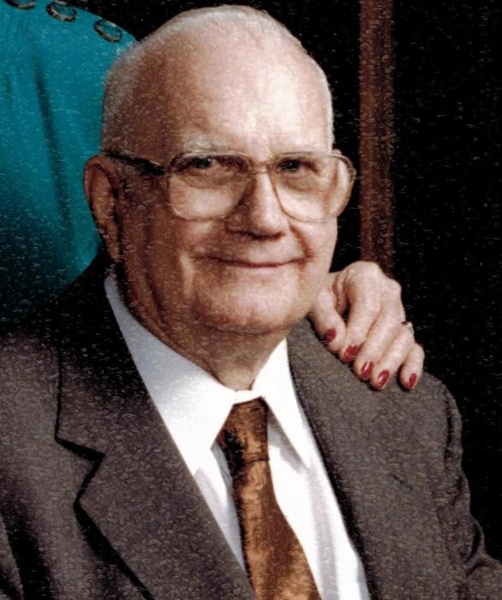 Benjamin, was born April 6, 1925 in St. Louis, Missouri to Benjamin Worley Fleming and Easter Mae Jewell. He was 20 minutes older than his identical twin brother, Samuel Worley Fleming. Benjamin’s father's family originated from Belgium and his mother was of Scotch Irish ancestry.

The family moved to Texas a month after the birth of the twins where he grew up and graduated from Crystal City, Texas High School in May of 1942.  Benjamin and his twin brother then enlisted in the U.S. Navy in May of 1942.   They were both sent to Newport, RI for torpedo school training.  Afterwards, Ben served on the USS Melvin Destroyer.  He was a Veteran of World War II.

On January 8, 1945 he married Vera Coleman, they were blessed with two daughters, Alta Mae Hopp of Chandler, AZ and Charlotte (John) Hartter of Sabetha, Ks.  Benjamin worked for the Missouri Pacific Railroad in the round house and then as a telegraph operator until 1960. He then moved from Crystal City, Texas to San Antonio, Texas and drove a city bus at night and went to school during the day for electronics.  He then acquired a job with Western Union as an electronic technician and was transferred to Sabetha, Ks in 1962.

Benjamin loved to fly, he acquired his license to fly small aircraft and also was licensed to fly helicopters.   He then became a flight instructor and taught numerous people around the local area to fly.  Benjamin also had a small engine repair shop and was a licensed electrician and plumber. He was a long time member of the Dimmit County Masonic Lodge #566 in Carrizo Springs, Texas. He was a member of the Sabetha Lions Club. He and Vera loved to dance and went dancing every chance they could.  Benjamin loved his gardening and canning.  He also liked to cook and try new recipes.  But the most important thing is he loved chicken fried steak and pinto beans.

He was preceded in death by his parents, wife, Vera on February 5, 2013, brother and sister.

Funeral service will be Tuesday, October 25, 2016 at 2:30 p.m. at the Popkess Mortuary Chapel in Sabetha. Visitation will be Monday, October 24, 2016 from 6:00 to 7:30 p.m. at the funeral home. Interment will be made at the Sabetha Cemetery. Memorial contributions may be made to the Sabetha Community Hospital, sent in care of the funeral home, 823 Virginia, Sabetha, KS 66534.

To order memorial trees or send flowers to the family in memory of Benjamin Fleming, please visit our flower store.