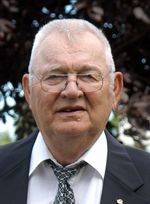 He was born November 8, 1929 the son of Bernard and Dolores Sharpe Alfers at Axtell. He attended Axtell schools and graduated in 1948. He served in the U.S. Army from 1951 - 1956 serving Korea. Barney worked for the Rural Electric Association, Axtell from 1953 until 1969. He then owned and operated Alfers Electric from 1969 until his retirement in 1997. He was a member of the United Methodist Church, Axtell. He had been an Axtell City Councilman and had previously served as Mayor of Axtell for several years. Mr. Alfers was a member of the R.R. Hendricks Post No. 214 of the American Legion, Axtell and of the NEMAR Shrine, Marysville Masonic Lodge 234 of Axtell and the Arab Shrine, Topeka.

He was married to Lila Witham, August 21, 1955 at Frankfort. She survives at the home in Axtell.

Funeral services will be Monday, July 13 at 10:00 a.m. at the United Methodist Church, Axtell with Pastor Camille Sutton presiding. John Trail will be the soloist and Darlene Porting will be organist. Casket bearers will be Christopher Alfers, Brian Alfers, Kendall Johnson, Matt Lynam, Bob Perry, and Leroy Koch. A visitation will be Sunday, July 12 from 7 - 8:00 p.m. at the Landreth Popkess Funeral Home. Burial will be in the Rose Hill Cemetery with full military honors by the RR Hendrick American Legion Post. Memorials may be left to the Axtell United Methodist Church and left in care of the funeral home.

To order memorial trees or send flowers to the family in memory of Bernard "Barney" Alfers, please visit our flower store.