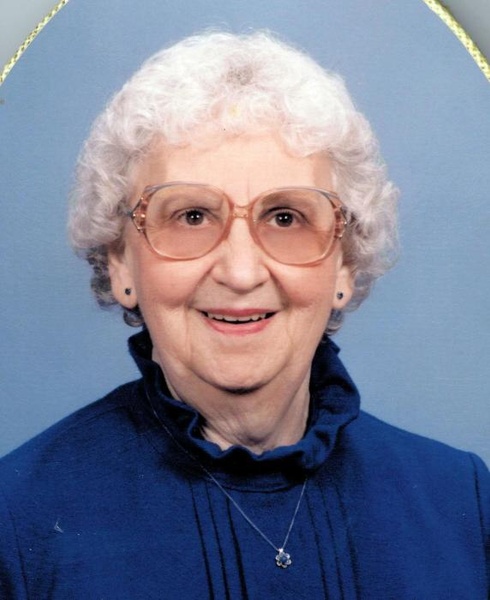 Beulah was born on February 4, 1925, the daughter of Edwin Eldon Bauman and Lillian Mae (Milne) Bauman at Oneida, Kansas.  She attended Oneida Schools.

She was united in marriage to Donald Keith Noble on June 2, 1946.  Beulah’s first job was at the sale barn in Sabetha which was owned by her uncle.  For a short time, Beulah was a teacher in a one room school house.  Beulah was also a house wife and homemaker.  In 1963, Beulah started a job that would be her career.  She went to work at Farmers State Bank in Sabetha, Kansas where she worked for 30 years in the bookkeeping department operating a proof machine.  Beulah loved her job and enjoyed going to work every day.

After retiring from the bank Beulah enjoyed traveling with her husband Donald to his various Army reunion gatherings.  Beulah loved all of her family and attended many activities, special accomplishments and hosted family gatherings for holidays and other special occasions.

Funeral services will be at 10:30 a.m. on Friday, January 5, 2018 at the First United Methodist Church in Sabetha. Visitation will be Thursday, January 4, 2018 from 6:00 to 7:30 p.m. at Popkess Mortuary in Sabetha. Interment will be made at the Sabetha Cemetery. Memorial contributions may be made to the First United Methodist Church of Sabetha or Alzheimer's Association, sent in care of Popkess Mortuary, 823 Virginia, Sabetha, KS 66534.

To order memorial trees or send flowers to the family in memory of Beulah Noble, please visit our flower store.