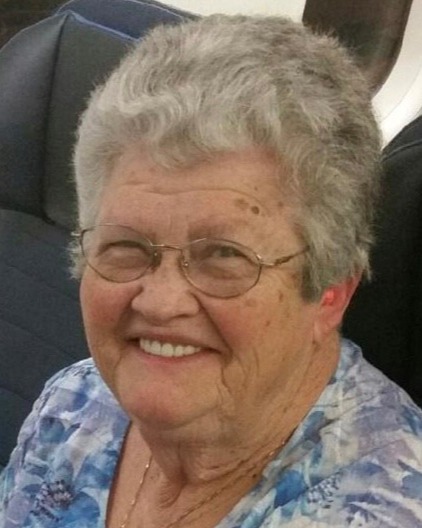 Billie Jeanne (Womack) Schultejans, 81, of Seneca, Kansas formerly of Kelly, Kansas died peacefully Monday, October 17, 2022, at Stormont Vail Hospital in Topeka, Kansas with her children by her side.

Billie was born in St. John, Kansas on January 6, 1941, to William W. and Georgianna (Hartsell) Womack.  She attended school in St. John and graduated from St John High School. After graduation, she moved to Topeka, Kansas, and she lived with her sister, Margie, and Margie’s husband, while she worked at Southwestern Bell Telephone Company.

Billie married Clarence H. Schultejans on April 27, 1963, at Holy Name Catholic Church in Topeka.  They lived and farmed south of Kelly until 2001.  At that time, they sold their farmstead to their son Tom, and moved to Seneca.  Billie worked at Ray’s IGA in Seneca for several years and then, worked for Prairie Band Casino and Resort at Mayetta, Kansas until her retirement in 2003.

Billie’s hobbies included sewing, embroidering, gardening, taking care of her flowers, and watching sports.  She was proud of each of her children’s and grandchildren’s achievements.  She was a member of the St. Bede’s Catholic Church and Altar Society in Kelly.

Billie was preceded in death by her parents; her husband, Clarence, on March 28, 2014; her daughter, Mary Kay, in 1967; her two brothers, Donald and Richard; and her two sisters, Margie and Ruby.

The family is planning a private graveside service at a later date.  Billie wished to be cremated and requested no services.  Memorial contributions are suggested to a charity, yet to be designated by the family sent in care of Popkess Memorial Chapel, 814 Castle Street, Seneca, Kansas 66538.
To order memorial trees or send flowers to the family in memory of Billie Jeanne Schultejans, please visit our flower store.