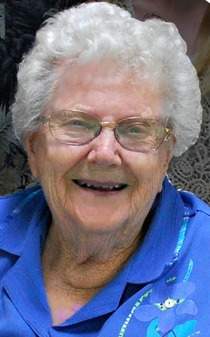 B lanche Louise (Murdock) Alexander went to be with her Lord and Savior on Saturday, November 8, 2014 surrounded by her family at Stormont-Vail Hospital.  She was born June 12, 1915 to Edward and Myrtle (Noland) Murdock, the third of eight children.  She was joined in marriage to Floyd Preston Alexander on May 26, 1943.  To this union three children were born, Joseph Dean, Joyce Marie, and Eugene Edward. After the death of her sister, Eva Hill, she and Floyd raised Eva’s son, Kenneth Hill as their own son.

Blanche graduated from Centralia High School and Emporia State Teachers College.  Blanche realized her calling to teach by tutoring her brothers and sisters at home.  She started her professional educator’s career teaching eight grades in one room schoolhouses in Nemaha County and surrounding areas.  Students and family alike learned from her hands on approach.  Those she taught learned about God’s creation through the insects, amphibians, birds and plants they raised from infancy in class.  Life lessons as well as practical ones were always part of her curriculum as they baked bread and churned butter.  One of Blanche’s greatest joy was seeing the spark in her student’s eyes as they learned something new.  The idea that no child is unteachable or unreachable was her teaching motto.  In 1980 she retired from teaching after having taught the second grade for over 20 years at Centralia Public Schools.  Blanche never retired from her love of learning, teaching and reading though.  After retirement she served as librarian for the Corning Public Library introducing young and old alike to a love of reading.  She passed on her love of the Lord as a children’s Sunday School teacher and an adult Bible studies teacher.  An avid lifelong reader she introduced many to a love of reading and poetry.  Of late one of her favorite books she kept extra copies to hand out to others was “Heaven Is For Real” by Todd Burpo.  As a lover of poetry Blanche memorized many passages for her enjoyment as well as to accurately and passionately recite them to her children, loved ones, students and congregations.

She and Floyd farmed in the Corning area and were very active in the community circles.  Blanche and Floyd were active in 4-H, the New Eden EUB Church, Corning Trinity United Methodist Church, American Legion Auxiliary of Corning, and Corning Public Library.

She enjoyed working in her garden and canning produce from her labors.  She was recognized as a great creator of beautiful quilts which she lovingly gave to family to treasure as well as generously giving them to charity groups for fundraisers.  Blanche also loved to crochet.  Although she was not known for her ability to sing Blanche enjoyed music and had a natural gift for melodies which she passed to her children.

To order memorial trees or send flowers to the family in memory of Blanche Alexander, please visit our flower store.