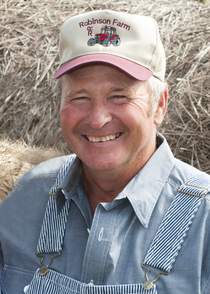 B urton Robinson, aged 66, of Sabetha passed away peacefully in his home on Friday, June 5, 2015.

He was born on May 12, 1949 to Rex Robinson and Theo (Ransom) Robinson of Sabetha.  After Theo Robinson and his older sister, Shirley Ann, were killed in a car accident in 1957, he lived on the Robinson homestead near Capioma and attended school at Woodlawn.  He graduated from Sabetha High School in 1967.

He farmed and raised cattle in the Woodlawn area his whole life.  He was a District Manager for Archer Petroleum for over 30 years.  He was President of the Capioma Cemetery board and Secretary/Treasurer with Nemaha County Conservation District.  He kidded everyone and knew everyone in town.

He married Connie Jean Bestwick of Sabetha on February 4, 1968.  They had 3 children and 15 grandchildren.

Survivors include his wife, Connie; his son Craig Robinson and his wife Stacy of Sabetha; his son Jon Robinson and his wife Tifani of Valley Center; his daughter Shirley Walker and her husband Brandon of Wamego; his grandchildren Benjamin, Sarah, Michaela, Joshua, Abigail, Timothy, & Zachary Robinson of Sabetha and Kaid, Drake, Aiden, & Lyric Robinson of Valley Center and Susannah, Isabelle, Gwendolyn, and Anastasia Walker of Wamego; and many friends and family.

He was preceded in death by his mother, Theo Robinson; his sister, Shirley Robinson, and his father, Rex Robinson.

A visitation with the family will be held on Tuesday, June 9 from 6-8pm at Popkess Mortuary in Sabetha.  The memorial service will be Wednesday, June 10 at Woodlawn Baptist Church at 11am.

Memorials for Capioma Cemetery and Woodlawn Baptist Church may be left with Popkess Mortuary.

To order memorial trees or send flowers to the family in memory of Burton Robinson, please visit our flower store.