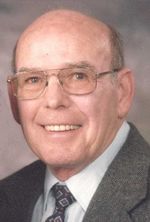 Carl was born in the Appalachian Mountains at Confluence Kentucky, May 20, 1937 the son of Ottis and Wornie (Sizemore) Campbell. The 9th of 10 children, his mother passed away when he was 3 and the older sisters cared for the younger ones. He attended grade schools in Letcher Co, KY, then in1951 he and his younger sister Lois came to Axtell and made their home with his sister Ollie and Gene Renner and attended the Axtell High School. In 1955 Carl moved to Clarksville, Indiana and was employed at Mengel Furniture Manufacturing and then later at Cissel Manufacturing both in Louisville, KY.

Carl was married to Barbara Cain at St. Michael's Catholic Church in Axtell, KS on June 26, 1956. They made their home in Clarksville, IN until 1961 when they returned with their family to Seneca, KS. Carl was employed by A.B. Bergman Auto Repair until A.B. Retired. He was a mechanic at Sanders Ford, Gilbert Motors, and Shop Foreman at Bergman Ford in Seneca. Then in 1969 Carl and Barb purchased Steck Service in Axtell as Campbell Oil/Carl's 66 continued to do mechanical repairs and farm fuel service. Carl and Barb moved their family to Axtell where their four daughters attended and graduated from Axtell High School. During the 28yrs in business, he employed a number of young men and trained them in the field of automotive repair.

He is survived by his wife Barbara of their home in Axtell, four daughters, Cheryl and Mel Garner of Fairview, KS, Cindy Jones of Axtell, KS, Carla and Dave Fairfield of Atlantic Iowa, and Angie and Mark Pippia of Axtell, KS; three sisters Faye Fortner of Knoxville, TN, (Anna) Campbell, Shelbyville, IN and Lois Shirley of Grand Junction, CO; nine grandchildren and two great grandchildren and many nieces and nephews.

Memorials in Carl's memory may be sent to Popkess Mortuary, Seneca, KS, a specific memorial will be designated at a future date.

To order memorial trees or send flowers to the family in memory of Carl Campbell, please visit our flower store.