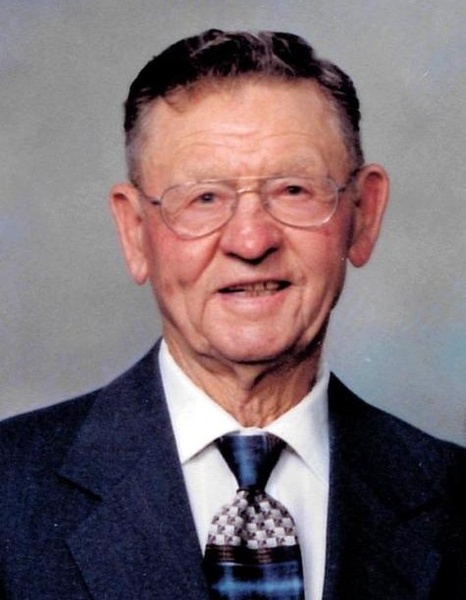 Carl was born December 15, 1928 to Carl W., Sr. and Minnie (Kroemer) Meyer in Preston, Nebraska the youngest of four children. He started school in September of 1934 at Mason Hill, south of Bern, Kansas and graduated 8th grade in 1942 from Bern Grade School. In 1945, the family moved to the farm in the Woodlawn area. He farmed with his father until 1952 and then continued on his own.

On October 23, 1955, Carl married Verlas Mae Mogler in Algona, Iowa and celebrated 63 years of marriage before her passing in June of 2019. Carl served in the Kansas Army National Guard as a Mess Sergeant from 1948 to 1956. He was a farmer and stockman until health issues in 2012 caused him to slow down and eventually stop in 2018. Carl also operated a small dairy from 1950 to 1960. He also did Capioma Township road maintenance for several years. Carl was a member of the Woodlawn Baptist Church and served as a deacon, trustee, and song leader for many years.

He is survived by his son, Gary (Deb) Meyer of Sabetha, KS; his daughter, Nancy (Wayne) Osterhaus of Seneca, KS; seven grandchildren and 16 great grandchildren.

A Private Funeral Service will be held Friday, April 17, 2020 at the Popkess Mortuary Chapel in Sabetha with Pastor Andy Smith officiating. Viewing will be open to the public on Thursday, April 16, 2020 from 9:00 a.m. to 6:00 p.m. at Popkess Mortuary in Sabetha.  Honorary pallbearers are his grandchildren, Jeremy Meyer, Kristina Kuebler, Jackie Cox, Kyle Cossel, Joe Meyer, Kipp Cossel, and Kristin Tangeman. Interment will be made in the Woodlawn Cemetery. Memorial contributions may be made to the Stormont Vail Foundation - Heart Center, sent in care of Popkess Mortuary, 823 Virginia Street, Sabetha, KS 66534.

To order memorial trees or send flowers to the family in memory of Carl Meyer, Jr., please visit our flower store.