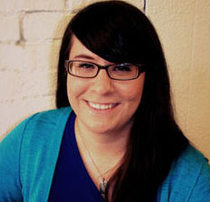 C arrie Elizabeth Smith was born on December 27, 1990 in Garden City, KS to Andy and Kathy (Weber) Smith.  At the age of 6 months she moved to Sabetha, KS. She often went with her dad to visit and entertain elderly church members in the community.   Her early years were spent playing with Barbies, soccer, and softball. During her high school years she took part in the SHS Marching Band, Drama productions, Scholars’ Bowl, Yearbook, Newspaper, Kays, NHS, Forensics and had a growing interest in graphic and computer design.

She spent many summers participating in Church summer camps as a counselor and as a camper.  She often assisted her dad at church camps with registration, security and as his “personal assistant.”

Long term friendships were a major factor in her life. She also was interested in crafts, posting on Pinterest and exploring and researching many of the old cemeteries in the area.

She graduated from Sabetha High School in 2009 and Oklahoma Wesleyan University in 2013. During her college years she was employed by the Mutual Girls Club in Bartlesville, OK, and also worked on campus at the coffee shop, Doc Lacy’s. After completing a major in Marketing Dynamics and Graphic design, she became employed by Bit Brilliant a Web and Graphic Design company in Bartlesville, OK.   She had been one of their lead designers for the past 2 years. In recent weeks, she had moved to Tulsa, OK to continue working at the Tulsa branch of Bit Brilliant.

She is survived by her parents; a sister, Corinne Smith of Lawrence, KS; a brother, Jason (Melissa) Smith of Nampa Idaho; paternal grandparents, Drexel and Jean Smith in addition to aunts, uncles and cousins.

To order memorial trees or send flowers to the family in memory of Carrie Smith, please visit our flower store.