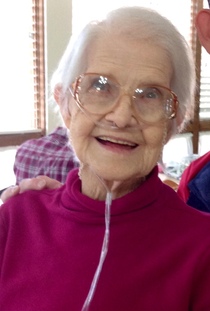 C ecelia Ruth (Schubert) Reinhart, 88, of Centralia, KS, died Wednesday, February 26, 2014 at Life Care Center in Seneca. She was born January 30, 1926 at Centralia, daughter of Frank L. and Florence E. (Searing) Schubert. She attended Centralia schools where she participated in many male oriented sports. Her love of athletics continued throughout her life.

On March 23, 1943, she married Ephraim J. Reinhart in Brown County. The couple celebrated 63 years of marriage before Ephraim's death on November 19, 2006.

Cecelia was a mother first, staying up all night with a sick child or making the "special dress" for that "special" dance. She worked many other jobs throughout her life from taking in ironing, delivering freight for Wagnor, Campbell Soup Company and a clerk for Horalek-Meyer and Haverkamp Grocery Stores.

Cecelia was involved in many church, civic and community activities and functions throughout her life. She enjoyed gardening, needlework and dancing as well as being an avid reader.

To order memorial trees or send flowers to the family in memory of Cecelia Reinhart, please visit our flower store.