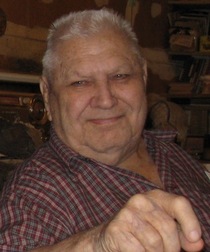 He was born on December 26, 1928 the son of Wayne Bell and Elsie (Boltz) Bell at Oneida, Kansas.  He was raised in Oneida area and attended school in Oneida.  He entered into farming as a young man.  He loved to roller skate and that is how he met his wife, Phyllis J. Rowland, while dating he owned a small plane and flew to Missouri to see Phyllis.  They were married on October 21, 1954 in Gower, Missouri.  They lived in St. Joseph, Missouri.  Five children were born to this union, Debbie, Gary, Cathy, Janice and James.  While living in St. Joseph he went to business school to learn how to work on TV’s, stereos, electronic and started his own business.  After that he changed his business to work on major appliances like refrigerators, washers and dryers and AC’s. They moved to Sabetha, Kansas in 1974 to go back to farming.  He loved collecting just about everything.  He loved things that were old.  Eventually he started an antique shop with his son, James around 1981.  They loved to travel and vacation while the kids were growing up in the 60’s.  In the late 60’s helped start a Bible Baptist Church in St. Joseph, Missouri and was Sunday school teacher along with his wife.  He attended Calvary Baptist Church will living in Sabetha.
He was preceded in death by his parents; his wife, Phyllis J. Bell; a son, Gary D. Bell.  He is survived by four children, James L. Bell of Sabetha, Deborah J. Thomas of Charlotte, North Carolina, Cathy D. Sanders of Hiawatha and Janice D. Bell of Sabetha; one sister, Violet Miller of Seneca and two granddaughters, Linda M. Cavin of Hiawatha and Sarah I. Strahl of Tampa, Florida.

To order memorial trees or send flowers to the family in memory of Charles Bell, please visit our flower store.