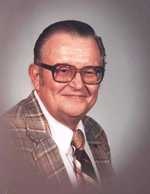 Charles was born December 2, 1921 the son of William and Ruby (Rea) Hoskins in Neodesha, KS. After his parents death at a young age, Charles and his siblings went to live at the Security Benefit Children’s Home in Topeka, KS where he spent his school years. After high school graduation he went on to Kansas State University graduating in 1950 with a Bachelor’s Degree. His first job teaching school was in Axtell where he taught for several years and then he took a job in Wichita teaching. Charles taught Math, Shop, and Drivers Education. While living in Wichita Charles went to night school at Wichita State University and earned his Master’s Degree in Education. He later moved to California where he taught until his retirement. They returned to Kansas in 1997.

Charles married Ruth Landreth on June 22, 1952 in Axtell, KS. She survives of the home in Seneca, KS.

He is survived by his wife Ruth; a son, Kevin Rea Hoskins of Hollister, CA; a daughter, Pamela Sue Aguilar of Morgan Hill, CA; 5 grandchildren and 4 great grandchildren.

He is preceded in death by a brother Edward Hoskins and two sisters Louise Denney and Georgiana Guellette.

Memorial services will be Saturday, April 9 th at 10:30 am at the Popkess Memorial Chapel in Seneca, KS. Reverend Bill Driver will conduct the services. Robin Holthaus and Dirk Colgrove will sing solos. Private family inurnment services will be in the Rose Hill Cemetery in Axtell, KS.

Memorials are being left to the Gideons International, Seneca United Methodist Church or the Life Care Center of Seneca.

The Popkess Memorials Chapel of Seneca, KS is in charge of arrangements.


To order memorial trees or send flowers to the family in memory of Charles Hoskins, please visit our flower store.