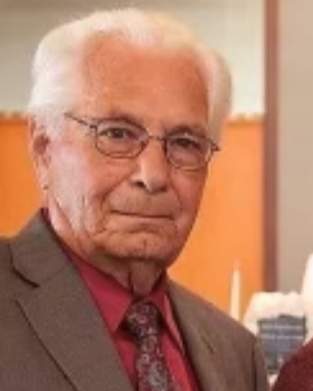 Charles was born on November 30, 1932, to Charles Darwin and Lola May (Dillaplain) Rogers in Fairview, Kansas.

The following article appeared in the Fairview Enterprise on Wednesday, July 15, 2020.

Charles requested the article serve as his obituary.

Charles lived just south of Fairview, in the house later occupied by John and then Fred Kopp.  During Charles’ childhood the family also lived and farmed at the Wikle place to the south of Fairview, at a farm near Fidelity, and another farm a mile west of the US 75 and K-20 intersection.   In 1942, Charles’ father, Darwin, wanting to contribute to the war effort but ineligible for active duty because of his age and his occupation as a farmer, Darwin moved his family to Wichita where both he and Lola worked for two years at Boeing, helping to assemble B-17’s and B-29’s.

Except for those two years in Wichita, when Charles was in the 4th grade and 5th grades, he attended grade school and high school in Fairview.  Charles was a good athlete, lettering in football, basketball, and track where he competed in the 100-yard dash, hurdles, and long jump.  During his freshman year, Fairview had not resumed its football program, so, Charles played softball instead.  He lettered in softball as well, making him one of very few (Clifford Klein and Allen Thompson being two others) who lettered in four sports at Fairview High School.

After graduating with the class of 1951, Charles worked for a construction company in Bonner Springs, Kansas.  In November of 1951, when he turned 18 years of age, he registered for the draft.  Rather than waiting for his number to be called, he signed up for the Navy and began what was to be a 20-year career.

Charles’ farm background convinced the Navy that he should be a Seabee (U.S. Naval Construction Battalion) but he in fact developed a variety of specialties.  His first assignment was to Assault Boat school, followed by service on a troop ship alternating between Japan and Korea at the height of the Korean War.  Charles became the skipper of a “mike boat” (Landing Craft Mechanized) and in 1952 ferried troops ashore in two contested landings at Inchon, near Seoul on Korea’s west coast, and Wonsan on the east coast of what is now North Korea.

As a Boatswain’s Mate, Charles had various duties during the Korean War, at sea, where he stood watch on the bridge, and ashore in Yokohama, Japan.  After four years in the Navy, and a rank of Bosun 3rd Class, Charles reenlisted with a new military specialty (Ship Service) and was stationed at Alameda, California.  Shortly there after he was assigned to the USS Rainier, a seaplane tender and fleet flagship.  The ship did patrol duty in the Taiwan Strait and roamed as far south as Borneo Island in Southeast Asia.  Charles’ Navy travels took him through the Panama Canal to duty in Norfolk, Virginia in the late 1950’s followed by three years in Puerto Rico, and then a year aboard the carrier USS Saratoga in the Mediterranean where he remembers some great ports of call!

Charles worked for the Strader Drilling Company in Holton, Kansas for several years, while also feeding cattle at this father’s farm west of the K-20 intersection.  He headed up a logging company for a time and wound up his active working career with eight years as a highway construction superintendent with the Ebert Construction Company of Wamego, Kansas.

Charles married the former Isabel Thompson in 1999, bought land on the north side of Fairview, built a home there in 2001, and became a committed and very active citizen of his old hometown.

In 2003, following the death of the incumbent mayor, Charles was asked by City Council Chairman, Paul Reynolds, to step in and serve the remainder of that mayoral term.  Charles did so, and then was elected to two full terms, and thus served a total of ten years as mayor.  Charles took understandable pride in those years of leadership in Fairview.  He worked hard to secure funding for and coordinated the completion of the Fairview Community Center which opened in 2006.  He focused on improving the appearance of the town, with an emphasis on cleaning up vacant lots and removing unused structures.  During his time as mayor, Charles contributed substantial sums of his own money to various community improvement projects, including the restroom addition to the city building in the park and provision of bunker gear to the fire department.  Also, he was the main advocate and fund-raising organizer of the Fairview Veterans Memorial, an important and attractive addition to Fairview.  In 2009, Charles and Isabel received the Fairview Distinguished Alumni Award, for their outstanding service to the community.

For the last ten years, Charles and Isabel have spent almost half their time in Texas in their large RV, at San Benito, near Harlingen during the cold winter months.  But, when the weather started to warm up, they were always ready to come home to Fairview.  Charles had a great fondness for Fairview, and the good people who live there.  He has had his disagreements with a few of them over various civic issues through the years, but he appreciated that they were as committed as he was to making Fairview a better place.  Charles believed that if people have a strong point of view about what they believed was wrong or right in the community, he encouraged them to speak up, and to get in the arena.  That’s what he had done, to good effect.

Charles was preceded in death by his parents and his brother, Earnest Rogers.

Survivors include his wife, Isabel, of Sabetha; two stepsons, Bill (Lori) Rieger and Jim (Julie) Rieger both of Fairview; two stepdaughters, Ellen (Fred) Piper of Cottonwood, Arizona and Sharon Drake of Hiawatha, Kansas; 7 grandchildren; 8 great-grandchildren; and a host of friends.

Funeral services will be held on Friday, October 7, 2022, at 11:00 a.m. at the Fairview United Church of Christ in Fairview, Kansas.  A visitation will be held from 9:00 a.m. until 11:00 a.m. prior to the funeral service at the church.  Interment will be in the Mount Hope Cemetery in Hiawatha, Kansas with full military honors.  Memorial contributions are suggested to the Fairview American Legion Post 322 or to the Fairview United Church of Christ and sent in care of Popkess Mortuary, 823 Virginia, Sabetha, Kansas 66534.

To order memorial trees or send flowers to the family in memory of Charles W. Rogers, please visit our flower store.