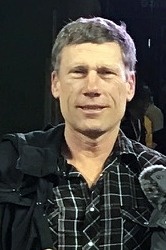 C hris A. Holthaus, 60, of Seneca, Kansas passed away on Sunday, August 13, 2017 at the KU Medical Center in Kansas City. After a three week battle with cancer he went home to be with his Lord.

Chris was born on November 4, 1956 the youngest son of Carl Holthaus and Rosemary (Olberding) Holthaus in Seneca.  He attended Saints Peter and Paul Catholic School and the Seneca Public School.  He graduated in 1974 from Nemaha Valley High School.  Chris attended NEK Vo-Tech in Atchison in the electrical program, and Pittsburg State Technical program for electrical motor repair.  He then worked for Radig Electric in Emporia. While attending a Christian youth event at Kansas State University he met Cathy Sheahan.  They were married on February 21, 1981 in Beloit.  Together they have seven children.

They moved home to the family farm in Seneca, and Chris set up Holthaus Electric Motor Service in his garage in August of 1982.  He established the business literally from the ground up.  He built the garage, the motor rewinding equipment and ovens needed to repair electric motors. Chris was assisted in customer service by his wife, his children, and an array of dogs, cats, geese, turkeys, and a goat.

Eventually he moved the business to Seneca in the old Kuckelman building, and finally to the Osterhaus land west of Seneca where his crew Ken, John, and Steven continue the service.  He served customers in all of northeast Kansas, Missouri, Nebraska, and Iowa, wiring grain bins, rebuilding grain driers, building phase convertors for irrigation systems, and installing electrical components into many of the industrial businesses. All of his sons had an opportunity to work with him, and learn the trade. In 2007, he and Cathy bought the old First National Bank building. Together they completely restored it with help from their children and many others.

Chris enjoyed teasing and hearing a good joke or story.  He also enjoyed the quiet of the country, animals, and adventures. At any time one might find on their farm such as, dogs, cats, raccoons, geese, ducks, turkeys, ostriches, pigs, cows, horses, a turtle, cockatiel, and chickens.  He loved his wife, and children, and his grandchildren lit up his life. He always looked forward to family coming home to play.  Although he often said, “I made many mistakes in life”, his desire was to serve God, and know Him more.

Chris was preceded in death by his infant son, Caleb Daniel; his parents; and a brother, Gene Holthaus.

Funeral services will be Saturday, August 19, 2017 at 10:30 a.m. at the NorthRidge Church in Sabetha. Visitation will be Friday, August 18, 2017 from 6:00 to 8:00 p.m. at the NorthRidge Church in Sabetha. Interment will be made at the Seneca Cemetery. Memorial contributions may be written out to the Chris Holthaus Scholarship for people pursuing a career as an electrician, sent in care of Popkess Memorial Chapel, 814 Castle, Seneca, KS 66538.

To order memorial trees or send flowers to the family in memory of Chris Holthaus, please visit our flower store.