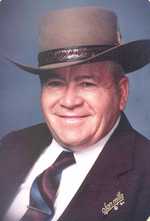 Clarence K. Brown, 87, passed away October 5, 2011 at Life Care, Seneca, Kansas. He was born February 27, 1924, the son of George J. and Minnie (Graham) Brown. He grew up in the Mina community (northwest of Axtell), graduated from Mina grade school. Clarence was a farmer and cattleman all his life. He married Elaine Jones on February 12, 1950 at the Beattie Methodist Church, she survives and lives in Axtell, Kansas. They had two sons, David {Karen}, Axtell, Kansas and Leon {Diane}, Topeka, Kansas. They have two grandsons, Cory, Axtell, Kansas and Thad, Princeton, W. Virginia and four great-grandsons, Cody, Nicholas, Austin, Tristin Brown. He is also survived by two step grandchildren, Heather Davis of Topeka and Shane Davis {Robin} of Savage, Maryland.  He is also survived by a niece Sharon Lackey.

He was preceded in death by his parents George and Minnie Brown and his brother, Lawrence Brown.

He was a member of the Marysville Moose Lodge.

He will lie in state at the Landreth-Popkess Funeral Home in Axtell all day Sunday, October 9th and a family visitation will be from 2:00 - 4:00 PM at the funeral home. Funeral services will be held at the Axtell Methodist Church on Monday, October 10, 2011 at 10:30AM. Burial will follow at Rosehill Cemetery.

Memorial donations may be made to United Methodist Church, Axtell, Kansas; Axtell EMT’s; or Nemaha County Hospice and sent to the funeral home.

To order memorial trees or send flowers to the family in memory of Clarence Brown, please visit our flower store.