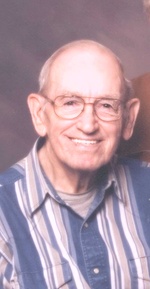 Dale was born December 17, 1928 at Centralia, KS to Willard C. Russell and Louise Schober  Warrenburg Russell.  Dale graduated from the Centralia High School in 1946.  In January of 1951 he entered the United States Army and completed basic training at Camp Atterbury, Indiana.   In October of 1951 he shipped out of Norfolk, Virginia for Germany and arrived in November on 1951.  He was in charge of “A” battery motor pool of the 109 th field artillery, 28 th Division.  He worked on gun trucks, ammunition trucks and ¾ and ½ ton vehicles.  Dale served during the Korean conflict and was honorably discharged December 28 th of 1952 as a sergeant first class.

After returning from his service in the Army Dale married JoAnn Argo August 21, 1954 at Winifred Baptist Church in Winifred, KS.

Dale was in the oil business for 26 years Russell oil started where the First National Bank of Centralia now sits.  After the bank was built Dale moved his business across the street, just south of the bank. Dale worked on many residents’ cars and sold lots of tires, and filled their tanks with fuel over his 26 years of service.

He is preceded in death by two sisters Lena Brown and Mary Griffiths.

Funeral services will be Thursday, November 8, 2012 at 10:00 AM at the Winifred Baptist Church in Winifred, KS.  Pastor Cory Bronander will conduct the services.  Linda Argo will be the accompanist.  Casket bearers will be Kenton Russell, Steve Argo, Dave Argo, Terry Argo, Ron Griffiths and Kraig Bailey. Honorary casket bearers are Darwin Skillett, Gordon Weyer, Rex Flentie, Don Gaston, Ron Little, Doris Armstrong, Roy Woolsoncroft and Rich Vernon.  There will be a visitation Wednesday November 7, 2012 from 6:30 – 8:00 at the Hayes-Popkess Funeral Home.  Burial will be in the Vermillion Cemetery in Vermillion, KS with full military honors by the Armstrong-Moyer American Legion post.

Memorials are being left to the Dale Russell Memorial fund.  A specific charity will be designated at a later date.  Memorials may be sent in care of the Hayes-Popkess Funeral Home (mailing address; 814 Castle, Seneca, KS 66538)

Online condolences can be left at www.popkessmortuaries.com.

To order memorial trees or send flowers to the family in memory of Clifford Russell, please visit our flower store.