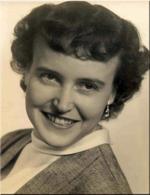 Cora was born July 5, 1928 in Pottawatomie County to Philip Joseph and Edna (Henderson) Spacek. She attended high school in Centralia. While she was attending high school, she was a live-in nanny/housekeeper for the Thompson family. She graduated from Centralia High School in 1946. After high school she worked at Jorden's Grocery Store in Centralia for two years. She then moved to Topeka where she roomed with June Owens. During this time, June met Cora's younger brother, Herman, through Cora and later became Cora's sister-in-law. While in Topeka, Cora began her accounting career at Southwestern Bell.

On November 22, 1953, Cora married Robert Earl Koch at the First Congregational Church of Centralia, Kansas. After getting married, Earl and Cora moved to Summerfield. There Earl worked with his older brother Ed Koch in a grain elevator. After waiting nine long years, Earl and Cora were blessed with the birth of their daughter, JoAnn, on February 2, 1962. Their next move was to Sabetha, KS where they lived from 1962-1995. Cora was the accountant for their trucking and farming business. Earl and Cora also remodeled houses for rentals. After she became an empty nester, she went to classes and became a realtor.

While in Sabetha, she was also an active as a club leader and project leader in the Lucky Clover 4-H Club with JoAnn for nine years. She was also a member of a woman's unit club and was an active member of the Church of the Brethren.

In 1995 Earl and Cora moved to Fairview to be closer to Earl's farm. There Cora was an active member of the United Church of Christ and enjoyed being in the church's women's club. She also helped write some articles for The Fairview Enterprise newspaper.

Sewing, knitting, crocheting, painting ceramics, refinishing furniture, and oil painting were other activities that Cora enjoyed. Most of all, Cora enjoyed being social with friends and spoiling her daughter and granddaughters, until Alzheimer's Disease took her away.

Survivors include husband Earl Koch of Fairview; daughter JoAnn New, husband Mick New, and granddaughters Andrea and Allison New of Topeka; and sister Francis Kelly of Macomb, IL. She was preceded in death by her two brothers Philip Spacek Jr. and Herman Spacek.

Funeral services will be held at Popkess Mortuary in Sabetha on Friday, March 29, 2013 at 10:00 a.m. A visitation on Thursday, March 28, 2013 from 7:00 to 9:00 pm and funeral home.  There will be a meal after the funeral services at the United Church of Christ in Fairview. The graveside service will be at a later date at Rochester Cemetery in Topeka.   Memorial contributions may be made to the United Church of Christ in Fairview, sent in care of the Popkess Mortuary in Sabetha, 823 Virginia, Sabetha, KS 66534.

To order memorial trees or send flowers to the family in memory of Cora Koch, please visit our flower store.