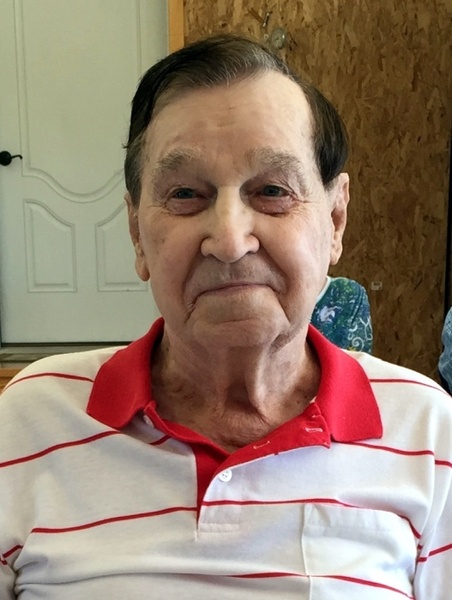 Dale was born August 9, 1926 on a farm north of Sabetha to Marvin and Elizabeth Florence (Rotz) Keim. He was the middle child of three children. He attended Albany school until the 8th grade and graduated in 1945 from Sabetha High School. Dale served in the Navy from 1945 to 1947 as a First Class Seaman. He was part of Operation Crossroads when the Navy detonated the first nuclear bomb test in the Pacific.

Dale drove a truck route from Sabetha Depot to St. Joseph for Union Pacific. When his parents moved from the farm Dale took over the farm and raised cattle. Dale loved checking on, buying, and selling cattle. Once the farm was sold, he worked for his cousin Glen Keim as a loading supervisor at the Georgia Pacific Wallboard Plant in Blue Rapids driving back and forth every day. Dale married Marceda Broxterman on April 20, 1991. He retired from GP in 1987.

Dale enjoyed spending time with his family, and upon retirement, he purchased a brand new 1987 Dodge Caravan that he, Marceda, Bette, Bud, Chuck and Patty took on multiple road trips. In 2004 Dale decided to go back to work driving a school bus. He loved that job and the children. He drove for 8 years and retired again.

Dale lived at home with Marceda until October 31st when he entered the AC Home.

He is preceded in death by his parents; a brother, Charles Keim; and a brother-in-law, Merril Bestwick.

Memorial service will be at 11:00 a.m. on Friday, January 5, 2018 at the NorthRidge Church in Sabetha, KS. Visitation will be from 10:00 a.m. to 11:00 a.m. prior to service time at the church. Inurnment will be made at a later date. Memorial contributions may be made to Kiwanis of Sabetha Avenue of Flags, sent in care of Popkess Mortuary, 823 Virginia, Sabetha, KS 66534.

To order memorial trees or send flowers to the family in memory of Dale Keim, please visit our flower store.