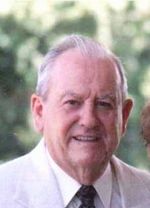 Dale Dwayne Miller, 84, of Seneca, passed away Tuesday, June 15, 2010 at home with his family by his side. Dale and twin brother Don were born September 4, 1925 in Bern, Kansas the sons of William and Anna (Schober) Miller. He attended Bern and Seneca schools. Dale joined his father in the family business of painting and wallcovering. He continued this work until recently when health failed. The family business continues into its third generation. On September 23, 1948 he married Norbertine Niehues at St. Bede's Catholic Church in Kelly, Kansas. Dale and Norb raised eight children.

He was an avid gardener who specialized in growing roses and planted many trees throughout the area. He had a great appreciation of all things in nature. Dale's skilled craftsmanship still endures in many homes around the area. His children and grandchildren brought him great joy. He was a member of the Sts. Peter and Paul Catholic Church in Seneca.


Mass of Christian burial will be Friday, June 18, 2010 at 10:00 a.m. at the Sts. Peter and Paul Catholic Church in Seneca. A parish rosary will be recited Thursday evening at 7:00 p.m. at the church. Dale will lie in state Thursday at the Popkess Mortuary in Seneca from noon until 5:00 p.m. Memorial contributions may be made to Sts. Peter & Paul Nature Center in memory of Dale Miller. The family will hold a private burial in the St. Bede's Catholic Cemetery.

To order memorial trees or send flowers to the family in memory of Dale Miller, please visit our flower store.