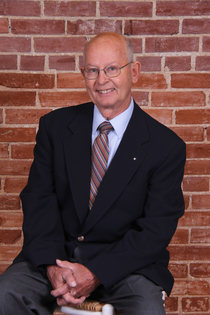 D arryl “Dutch” Alan Emert, 78 of Sabetha died Saturday, November 29, 2014 in Topeka, Kansas.  He was born August 3, 1936 the son of Lloyd Emert and Margaret (Hatz) Emert at Seneca, Kansas.  He attended Sabetha schools and graduated from Sabetha High School in 1954.  He entered the United States Army in 1959 and served until 1961.  He then returned to Sabetha where he worked for the Tilson Standard Station, where he met his future wife, Judith.  He was united in marriage to Judith Kettler on December 22, 1962 at the Congregational Church in Sabetha.  They celebrated their 50 th wedding anniversary with friends and family.  In 1965, he completed his degree at the Kansas State Teachers College of Emporia. He worked for Sweet Clover Dairy from 1971 to 1984 when he went to work for the United States Post Office until his retirement in 2011.  He was a member of the NorthRidge Church in Sabetha, Gideons International and served on the Nemaha County Recycling Board for several years.

Memorial service will be Friday, December 5, 2014 at 10:30 a.m. at the NorthRidge Church in Sabetha.  Visitation will be from 9:30 to service time at the church. The interment will be made in the Sabetha Cemetery.  Memorial contributions may be made to Gideons International or the NorthRidge Church Building Fund sent in care of the Popkess Mortuary 823 Virginia Sabetha, Kansas  66534.

To order memorial trees or send flowers to the family in memory of Darryl "Dutch" Emert, please visit our flower store.