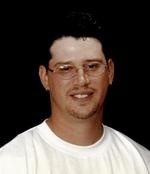 He was born April 4, 1975 in Colorado Springs, Colorado, the son of Robert and Sharon (Barrett) Gillette.  David attended schools in Colorado Springs and worked various jobs until he moved to Sabetha in May of 2003.
His loves were his children, fishing, and the Denver Broncos.  David worked for KB Roofing, Crosswinds, CJ Foods, and Lortscher Ag Service.

A visitation will be held Friday, April 6, 2012 from 6:00 to 8:00 p.m. at the Popkess Mortuary.  A private family inurnment will be held at a later date.  Memorial contributions may be made to the Damian and Alexis Gillette Education Fund, sent in care of the funeral home, 823 Virginia, Sabetha, KS 66534.  Online condolences may be left for the family at rememberingdavidgillette.com

To order memorial trees or send flowers to the family in memory of David Gillette, please visit our flower store.