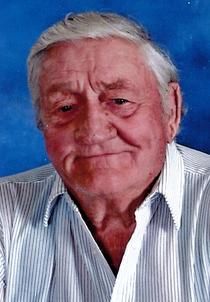 D enzel Howard Baumgartner, 85 of Sabetha died Wednesday, February 12, 2014 at home.  Denzel was born on February 16, 1928 the son of Sylvan Baumgartner and Mary (Samson) Baumgartner at home on the farm west of Woodlawn, Kansas. Denzel attended school and graduated from the 8th grade and attended two months of high school.  He was inducted in the United States Army on May 6, 1952.  He completed his basic training at Fort Riley, Kansas in the 10th Infantry Division.  He went overseas to Germany where he served for 18 months.  He returned home where he farmed and moved to the home place in 1959.  He was a successful farmer and received the Kansas Bankers Award for Conservation in 1981.  He was united in marriage to Ethel Wilhelm on August 9, 1952 at St. Bede’s Catholic Church in Kelly.  Denzel was preceded in death by his parents; a son-in-law, Bob Herzog.  He is survived by his wife of the home; six sons, Dwaine (Teresa) Baumgartner, Robert (Patty) Baumgartner, Russell Baumgartner and Dennis (Lisa) Baumgartner all of Sabetha, Stacey Baumgartner and Paul (Sherry) Baumgartner both of Falls City, Nebraska; five daughters, Elaine (Harry) Worden of Topeka, Darlene (Duane) Briggeman of Surprise, Arizona, Jane Herzog of Huntsville, Texas, Mary Addington of Topeka and Shirley (Shane) Magness of Huntsville, Texas; a sister, Norma Jean Fiegiener of Topeka and 21 grandchildren, 9 great grandchildren, several step grandchildren and step great grandchildren.

The funeral service is Monday, February 17, 2014 at 10:30 a.m. at the Popkess Mortuary Chapel in Sabetha.  A visitation will be Sunday evening 5:00 to 7:00 p.m. at the funeral home.  The interment will be at the Woodlawn Cemetery.  Memorial contributions may be made to charities yet to be designated by the family and sent in care of the funeral home.

To order memorial trees or send flowers to the family in memory of Denzel Baumgartner, please visit our flower store.