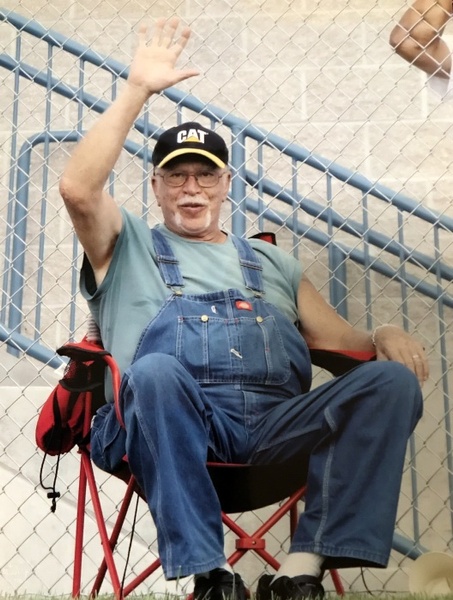 Dickie was born June 9, 1939 in Sabetha, Kansas, the son of Charles and Camelia (Patterson) Thompson. Dickie spent his entire life in Sabetha. After graduating from Sabetha High School, he joined the U.S. Navy. On August 5, 1967 he was united in marriage to Ann Ross of Hiawatha, Kansas with whom he had recently celebrated 53 wonderful years.

To know him is to love him with his sense of humor and great smile and ornery laugh. Dickie enjoyed many years of playing softball and coaching baseball. He also umpired baseball and softball for many years. Early on he worked at JBN as an electronic technician, then as a mailman, and then later you could find him driving around in his police vehicle. He finally retired as a truck driver, where he and his wife enjoyed many miles of traveling together over the years on the road. Many years of camping and fishing were also enjoyed by the family. Watching his kids and grandchildren at their sporting events was one of his ultimate joys in life, especially if they had a fresh batch of popcorn. Many will miss seeing his radiating smile when he ventured out for his morning coffee and donuts.

Dickie was preceded in death by his parents; his brother, Cecil Thompson; and his sisters, Maxine Ballew and Kay Starks.

A Memorial service will be held Saturday, April 24, 2021 at 11:00 A.M. at the the First United Methodist Church in Sabetha. Prior to the service, a visitation will be held at the church staring at 10:00 a.m.  The inurnment will be made in the Sabetha Cemetery with military honors conducted by the Sabetha V.F.W. Post #7285.

To order memorial trees or send flowers to the family in memory of Dickie Thompson, please visit our flower store.