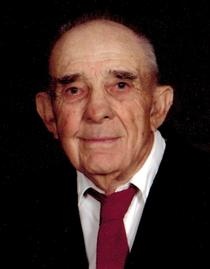 D onald Lee Dodd, 83, of rural Oneida passed away Friday, October 23, 2015. Don was born October 25, 1931 in Yuma, Colorado, the son of Leon and Rose (Finkbeiner) Dodd.  He attended rural school at Sun Set Valley until sixth grade.  The family moved to Nemaha County Kansas in 1944 and Don attended sixth and seventh grade country school.  He graduated Sabetha High School in 1950. Don worked at the Oneida Elevator after graduation.  He joined the U.S. Army in 1952 and served in Korea during the Korean War. After being honorably discharged from the army he worked for the grain elevator in Oneida, Nemaha County Coop Creamery, and then worked for the Engineering Department with KDOT.  Don worked for KDOT for over 41 years, retiring in 1997. He was united in marriage to Marlene Fuhrman on May 3, 1957 in Hiawatha, Kansas. They had three children, James, Jane and Joy. Don and Marlene are members of the Oneida United Methodist Church.  They were both avid square dancers and were members of the Sabetha Sunflower Club from 1979 to 1997 and members of the Seneca Squares from 1997 to 2013.  Don loved to farm and especially enjoyed raising his baby calves. Don was preceded in death by his parents; and his son, James on January 21, 2013. Survivors include his wife, Marlene of the home; two daughters, Jane Clark and her husband, Charlie of Silver Lake, Kansas and Joy Lednicky and her husband, James of Horton, Kansas; a daughter-in-law, Teresa Dodd of Seneca, Kansas; grandchildren, Nichole (Bob) Koch, Melissa (John) Williamson, Rachel Dodd, Hannah Dodd, Holly (Nick) Leach, Nick Clark, Jamie Clark, Neil (Jessica) Lednicky, Emily Lednicky; six great-grandchildren and a sister, Cogie Ann Hartrick of Leslie, Arkansas. Funeral service is Tuesday, October 27, 2015 at 11:00 a.m. at the Popkess Mortuary in Seneca, Kansas.  Visitation is Monday evening from 6:00 – 8:00 p.m. at funeral home. Interment will be made in the Sabetha Cemetery.  Memorial contributions may be left to Coins For A Cause, sent in care of the funeral home, 814 Castle, Seneca, KS 66538 .

To order memorial trees or send flowers to the family in memory of Donald Dodd, please visit our flower store.