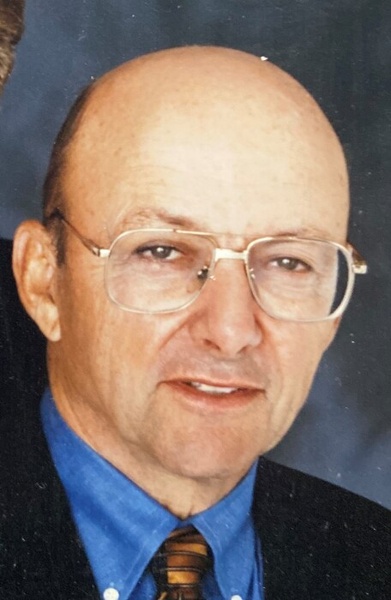 D onald L Ehrsam, a lifelong farmer on the family farm northeast of Bern, passed away on December 19, 2020, at the age of 93. For the last few years, he lived with his wife Marilyn at the Apostolic Christian Home in Sabetha, Kansas.

Don was born on July 25, 1927, to George and Sarah (Krainbill) Ehrsam. He attended Prairie Star Country School and graduated from Bern High School.  He joined the Air Force in 1951 and on May 31, 1952, married Marilyn Bingman in Highland Kansas. They were married for 68 years and had two daughters, Jackie and Julie.

Don loved working with cattle and was always busy with them and farming.  He truly enjoyed running K-9 Rations dog food and being a part of Bern Extrusion Inc.  He loved spending time at the Lake of the Ozarks with family and friends. Don was an avid K-State fan and enjoyed going to football and basketball games. Don also loved to travel, exploring new places and meeting new people.

Don was a member of the Bern United Methodist Church and was the Chairman of the church building committee. He was active in the Kansas Livestock Association.

Don is preceded in death by his parents, George and Sarah (Krainbill) Ehrsam; his brothers, Gerald Ehrsam and A. Rex Ehrsam.

Don was cremated and memorial service will be held Saturday, July 17, 2021 at 3:30 P.M. at the Bern Cemetery.  A light meal will be held at the Bern Community Building following the service.  Memorial donations can be made to the Bern United Methodist Church sent in care of Popkess Mortuary, 823 Virginia Street, Sabetha, KS 66534.

To order memorial trees or send flowers to the family in memory of Donald Ehrsam, please visit our flower store.