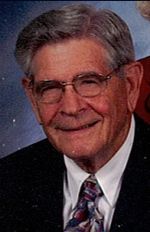 
On December 17, 1943 Don was united in marriage to Edith Maye Parr in Sabetha, Kansas. She preceded him in death on April 1, 1991. Don remarried on September 1, 1991 to Wilma Nadine Howard in Cedar Vale, Kansas.


Funeral service will be held Thursday, July 22, 2010 at 1:30 p.m. at the Popkess Mortuary in Sabetha. The family will greet friends Wednesday evening from 6:00 to 8:00 p.m. at the funeral home. Memorials may be made to Gideons International or donor's choice, sent in care of the funeral home.

To order memorial trees or send flowers to the family in memory of Donald Jones, please visit our flower store.