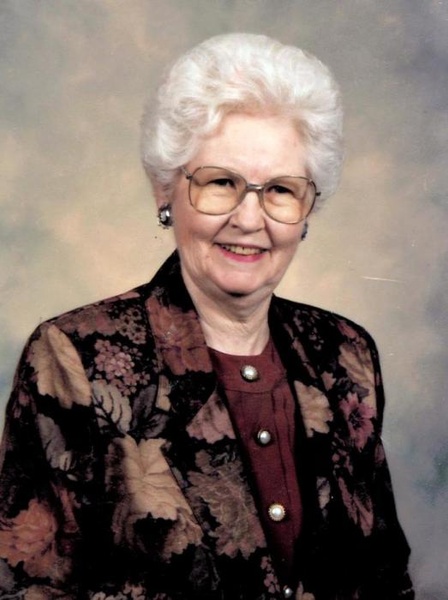 Donna was born April 17, 1931 in Sabetha daughter of Ira and Alice (Basket) Haxton. Donna attended school in Sabetha and graduated from Sabetha High School. She married Glenn Aeschliman on February 26, 1950. They began farming near Woodlawn, KS.

The family relocated to a farm near Centralia, KS in 1965 and she began working at CGF Grain Co. in Centralia, where she worked for 25 years. She also taught Sunday school for many years in both the Sabetha and Centralia Congregational Church, leaving her positive influence on hundreds of children over the years.

Glenn and Donna retired from farming and moved to Sabetha’s Apostolic Christian Home in 2012. Two sons and a daughter were born to this union: Steven, David and Susan.

Donna loved being with family members, painting, decorating, baking and she absolutely adored Christmas. She hand-drew Christmas cards for years and loved baking gifts for neighbors at Christmas. She painted dozens of items as gifts to be enjoyed by the recipients. Donna also enjoyed record keeping for the grain elevator and farming operation.

She was preceded in death by her parents, Ira and Alice Haxton; a brother, Loren Haxton; a father-in-law and mother-in-law, Chris and Golda Aeschliman; and a daughter-in-law, Patricia Aeschliman.

Funeral services will be Saturday, November 25, 2017 at 11:00 a.m. at the Popkess Mortuary Chapel in Sabetha, KS. Visitation will be from 9:30 a.m. to service time at the funeral home. Interment will be made at the Sabetha Cemetery. In lieu of flowers, the family request memorial contributions may be made to the Apostolic Christian Home or Alzheimer’s Association, sent in care of Popkess Mortuary, 823 Virginia, Sabetha, KS 66534. The family is grateful for the loving care Donna received the past five years at the Apostolic Christian Home and wants to give them and the staff at Sabetha Hospital a special thank you.

To order memorial trees or send flowers to the family in memory of Donna Aeschliman, please visit our flower store.