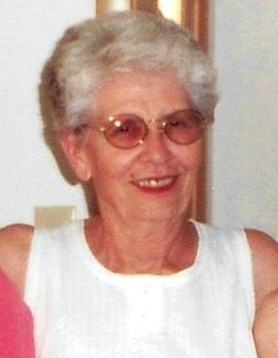 Doris was born May 24, 1931 in Goff, Kansas the daughter of August and Glennies (Neal) Shump. She grew up on a farm north of Goff, Kansas and later moved to Sabetha. Doris attended and graduated from Sabetha High School, and then joined the United States Army in 1949. Her basic training was at Fort Lee in Virginia. After basic training she was stationed with the 5th Army Headquarters in Chicago, Illinois where she deciphered codes.

She married Bill Shroyer and to this union was born four children. They later divorced. Doris married Gene Hartman in 1963 and they had one son.

Doris was a devoted wife, mother, and grandmother. She enjoyed reading western novels, and caring for her home.

Doris was preceded in death by her parents; her sister, Wanda Osborn; and a son-in-law, Dennis Davis.

A Celebration of Life Service will be held Saturday, September 21, 2019 at 10:00 a.m. at the Popkess Mortuary Chapel in Sabetha, Kansas. Military honors will be conducted by the Sabetha V.F.W. Post #7285. Inurnment will be made in the Sabetha Cemetery at a later date. Memorial contributions may be made to the Sabetha Manor, sent in care of Popkess Mortuary, 823 Virginia Street, Sabetha, KS 66534.

To order memorial trees or send flowers to the family in memory of Doris Hartman, please visit our flower store.