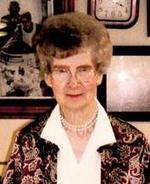 
She was born on October 16, 1913 at Axtell, KS the daughter of Clem and Elizabeth Schmits Grothjan. She graduated from Axtell High School.


Dorothy worked as a nurse’s aide at the Axtell Hospital for several years, and then she moved to Kansas City where she was a nanny. When her parents became elderly she lovingly cared for them until their deaths. She also cared for her sister Ernestine until her death. Dorothy sold Avon for years in the Axtell and Beattie areas. Dorothy was known and loved by many friends and relatives.


Dorothy, because she never married, had no children but loved her nieces and nephews like they were her own. She cherished the time they spent together every summer and always looked forward to their next outing.


Dorothy was a member of the Sts. Peter and Paul Catholic Church in Seneca and the Altar Society of the church.


Dorothy is preceded in death by her parents and her sisters, Rose A. Severin and Ernestine Grothjan; and a brother, Victor Grothjan. She is survived by nieces and nephews.


Mass of Christian Burial was Tuesday, January 10, 2012 at 11:00 AM at the Sts. Peter and Paul Church in Seneca Father Y.L. Marreddy celebrated the mass. Marcena Stallbaumer was the Eucharistic minister. Marion Rottinghaus was Eucharistic Minister and Lector. Servers were Michael Love, Dalton Hiltibrand and Quincy Haverkamp. A parish rosary was led by Marilyn Carlson Monday evening at 7:00 PM at the Popkess Memorial Chapel in Seneca. Mrs. Grothjan was cremated and burial will be in St. Michael’s Catholic Cemetery in Axtell, KS.

A memorial has been established for the Nemaha Valley Community Hospital and can be sent in care of the Popkess Memorial Chapel in Seneca, KS.

To order memorial trees or send flowers to the family in memory of Dorothy Grothjan, please visit our flower store.