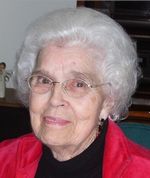 Dorothy McCord, age 90, passed away peacefully in her home Wednesday, July 21, 2010,from causes incident to Alzheimer's Disease. Dorothy was born February 6, 1920, the fourth of six children, in a rock farmhouse near Centralia, KS, to Fielden Crosswhite and Bessie (Doolittle) Crosswhite. She and John Charles (Dutch) Wells were married March 23, 1941, in Horton, Kansas. To this union were born a son, Charles, and a daughter, Janet Kay. After Dutch's passing, February 8, 1960, Dorothy married Ralph E. (Mac) McCord December 19, 1960, in Sabetha.


Having grown up on a farm, Dorothy knew the value of hard work. She was known for her beautiful flower beds, on North 12th, as well as at the Apostolic Christian North Village. She was talented at so many things, i.e., sewing, cooking, baking, flower and vegetable gardening, painting, wallpapering, to name a few. Dorothy worked outside of the home at the Sabetha Seed House for 31 seasons, retiring in 1983. Dorothy's quick wit and delightful sense of humor were enjoyed by all who knew her. She was a wonderful friend and neighbor to so many throughout her life. It was her nature to serve others and even as Alzheimer's began to take its toll, it concerned her that she was not able to help with the dishes, cook, do laundry, etc.


For Dorothy's 90th birthday party, friends and family were asked to tell something they remembered about her. Nearly every memory included her "beautiful smile". It was a reflection of her beauty within as well.


A long time member of the Congregational Church, now known as NorthRidge, Dorothy loved attending (as her health permitted) and learning more about her Savior, Lord, and King. She is finally in his loving arms, freed from the mind and body that had betrayed her for the past several years.


We, Dorothy's family, want to express our gratitude to all of those who have so tenderly cared for Mother during her time of need. In particular, we want to thank her devoted and loving caregivers, Kyndl Chandler, Kathy Chandler, Karen Baldridge, Martha Keely, Peg Hartter, and Linda Ashcraft.


Funeral services will be Thursday, July 29, 2010 at 11:00 a.m. at Popkess Mortuary, 823 Virginia St. Sabetha. Friends may call Wednesday, July 28, from 7:00 to 8:30 p.m. and again Thursday, from 9:30 to 10:30 a.m., prior to services, both at the mortuary. Memorial contributions may be made to the Dorothy McCord Memorial Fund. The funds will be used to replace trees in Sabetha damaged during the 2007 ice storm. Interment will take place at the Albany Cemetery.

To order memorial trees or send flowers to the family in memory of Dorothy McCord, please visit our flower store.