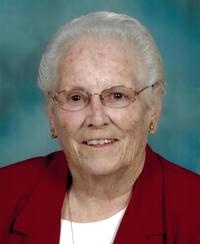 She was born October 25, 1924 in Soldier, KS the daughter of Percie and Lillie (Noel) Alexander.  Dorothy attended Corning Rural High School and graduated in 1943.  She was united in marriage to Floyd Talley on July 21, 1943.

Dorothy worked for dress factories in Holton, Horton, and Onaga.  She owned and operated the Home Café in Corning for many years.  Her last employment was with CR Industries in Seneca.

“Grandma Dorothy” as she was known to many, was kind and giving.  She opened her home to anyone who needed her.  She cared for her grandmother and her great aunt in her home for many years.  Nieces, nephews, and cousins had made a home with her.  Everyone loved Grandma Dorothy.  She was a 4-H leader, teaching many to bake bread and crochet.  She belonged to many social clubs, loved to travel and play cards.  Always an advocate for young people, she was their protector.  She had been known to ward off police-always acting on kids’ behalf.

She was a member of St. Patrick’s Catholic Church in Corning.

She was preceded in death by her parents; husband, Floyd Talley; a daughter, Virginia Lee Talley; brothers, Glenn Alexander and Bob Alexander; and one sister, Ruby Beck.  Dorothy is survived by her son,  Dennis (Louella) Talley of Corning; her daughter, Janie (John) Kramer of Corning; a nephew, Leroy Chadwick of Seattle, WA; a sister, Mary Chadwick of Prince George, Canada; 8 grandchildren and 35 great-grandchildren.

Mass of Christian Burial, will be celebrated by Father John Reynolds, Father Arul Carasala, Abbot Owen Purcell and Abbot Ralph Koehler on Monday, August 5, 2013 at 10 a.m. at St. Patrick’s Catholic Church in Corning.  Visitation is Sunday, August 4, 2013 from 6 - 8 p.m. at St. Patrick’s Church with recitation of the rosary at 7 p.m.  The lectors are Jenny Gerety and Cody Huerter.  Gift bearers are great grandchildren.  Eucharistic Ministers are Jana Kramer and John Kramer.  The musical group “God’s Blessing Through Music” led by Wade Talley, will sing at both the visitation and the funeral.  Pallbearers are Jeff Kramer, Joe Kramer, Wade Talley, Jim Kramer, Matt Talley, Ross Talley, Mark Huerter, and Dan Gerety. Interment will be in the America City Cemetery.

Memorial contributions may be made to the Corning Ball Association and sent in care of the funeral home, 814 Castle, Seneca, KS 66538.

To order memorial trees or send flowers to the family in memory of Dorothy Talley, please visit our flower store.