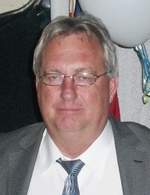 Doug grew up in , graduating in 1972 from . He attended and graduated with honors in May 1976 with a BS degree in Electrical Engineering. After graduating college, he moved to , , where he was employed by Motorola Corporation in .

He married Deborah Janke Barnett in on October 30, 1976. Doug and Debbie later moved to where he worked for Hewlett Packard Corporation. They later divorced and he returned to Phoenix to work for Motorola.

On December 18, 1982 he married Beverly Kongs in . To this union was born two daughters, Ashley Marie and Kylie Morgan. Doug resigned from Motorola and became a stay at home dad for several years. He was actively involved in his daughters’ education, swimming, soccer, and golf. Doug and Bev divorced in 1998.

Doug married Roberta Swanson on May 9, 2003 in . He was currently a sales representative for ADT Security Systems.

Doug belonged to the Jayhawk Area Council of Boys Scouts. He received his Eagle Scout Award, the highest honor in boy scouts, in 1969. Doug enjoyed scouts, hunting, and participating in sports as he grew up in . He learned his carpenter skills working along side of his dad over the summer months during high school and college. While at K-State he was a member of the Kappa Sigma Fraternity. During his adult life, he enjoyed golfing, cooking, making family recipes, coaching soccer, gardening, and his latest passion, four wheeling the back roads of in a jeep. He was a current member of the St. Matthew’s United Methodist Church of Mesa. Doug was a person who formed many lasting friendships no matter where he lived during his life.

Doug was preceded in death by his parents, Bob and Glenadene Fowler Armstrong, and stepfather, Jodel Armstrong.

Funeral services are Tuesday, September 20 at 10:30 AM at the Centralia United Methodist Church. Rev. Michael McKee will officiate. Janelle Glatczak will play the organ and Dirk Colgrove will sing. A visitation was held Monday evening at Hayes-Popkess Mortuary, Centralia. Burial was in the Centralia Cemetery.

Memorials are being left to the Johnson Center for Basic Cancer Research at Kansas State University or the Jayhawks Area Council for the Boy Scouts of America and may be sent in care of the Hayes-Popkess Funeral Home (Mailing address: 814 Castle, Seneca, KS)

A memorial service will be held later in October in Phoenix, Arizona.

To order memorial trees or send flowers to the family in memory of Douglas Fowler, please visit our flower store.