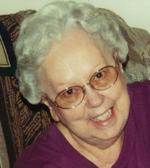 D reda Mae (Curtis) Lee, 79, was born on November 7, 1932 at Vermillion, Kansas the daughter of Floyd Towne Curtis and Nettie E. (Mann) Curtis.  She attended in Vermillion from grade school through high school.  She graduated from Vermillion High School in May of 1950.

She worked at the Vital Statistics and Cancer Records with the State Board of Health for 4 1/2 years in Topeka, Kansas.  She then transferred to the Accident Records of Traffic & Safety Department for the State Highway Commission where she worked for 11 years.   In 1973, Dreda became the first lady driver’s license examiner in the state of Kansas and worked out of the Salina and Abilene offices.  She stayed with the Driver’s License Division of Motor Vehicle Department for 10 years and then Clawson Printing in Frankfort for 4 years.

Dreda had a great love of music.  She loved to sing, play piano, accordion and organ.  Her favorite type of music was gospel and country.  She also loved to embroider quilt tops, read, play scrabble and work crossword puzzles.    Dreda and Calvin loved to travel and took many vacations.

Dreda died on Thursday, September 20, 2012 at the Cambridge Place in Marysville, Kansas at the age of 79, where she had resided from mid-February 2012.  She was preceded in death by her parents; her loving husband, Calvin; a nephew, Steve Curtis of Apple Valley, California.  She is survived by a brother, Paul Curtis of Kerrville, Texas; a sister, Ruth Volle of Olathe, Kansas; two nephews, Terry Curtis of La Verne, California and Dick Volle of Osawatomie, Kansas; two nieces, Linda Jahr (Gene) of Olathe, Kansas and Mary Daily of Turner, Kansas; many great nieces and nephews, as well as seven great great nieces and nephews.  She is also survived by special friends, Ted and Becky Pinkham of Marysville, Kansas and their children, Candice and Eric Schmidt (Breanna and Jayce) and Wade and Lynn Pinkham (Kody).

To order memorial trees or send flowers to the family in memory of Dreda Lee, please visit our flower store.