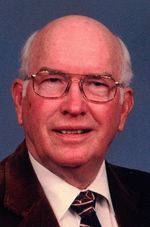 
He was born on February 24, 1924 and raised on a farm in Exeter Township, Kansas. He was the son of Warren Todd and Mina (Moyer) Todd, the youngest in his family. He attended and graduated high school in Clay Center, Kansas in May of 1942.


He completed a degree in Veterinary Medicine in Manhattan, Kansas at the Kansas State College in May of 1954. He met his wife, Adelle, in Iowa and they came to Sabetha, Kansas where he established a practice in 1955 after one year in a clinic in Des Moines, Iowa.


He and his family were members of the First United Methodist Church in Sabetha where he was active as chairman and member of the board for several years.


He is survived by his wife, Adelle, in Sabetha and three children; daughter, Linda Umphrey and her husband, Ray of Lenexa, Kansas; son, David Todd and his wife, Nancy also in Lenexa, Kansas; daughter, Mary Brundige of Salina, Kansas; a brother, Duane Todd of Seneca, Kansas as well as 9 grandchildren; Will, Catherine, Emily, Luke, Sarah, Rebekah, Katie, Todd and Charley.

To order memorial trees or send flowers to the family in memory of Dr. Eldon Todd, please visit our flower store.