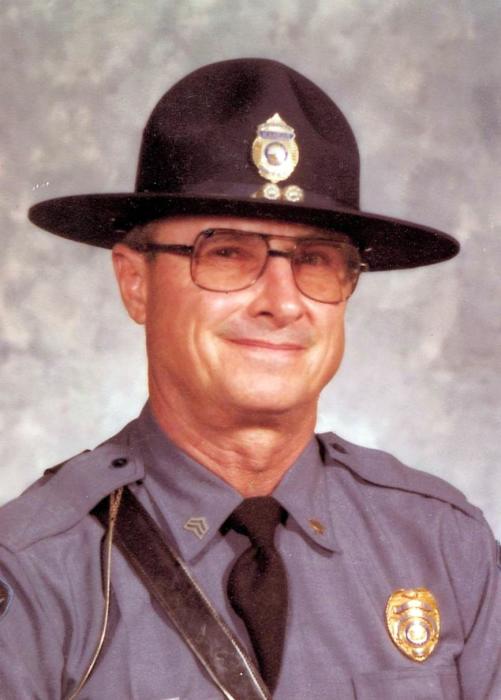 He was born January 16, 1926 in Sabetha, KS the son of Joe and Ida (Aeschliman) Hartter. Earl attended Sabetha Schools participating in many school activities and sports, graduating in 1944. He was inducted into the Army after graduation, receiving basic and advanced training at Camp Robinson Arkansas and Fort Benning Georgia.  He served with the 28th Infantry Division in Europe as a rifleman returning to the United States after the War in Europe, and was reassigned to the 2nd Infantry Division at Camp Swift Texas. After discharge from the service he returned to Sabetha and entered into partnership with his father in Hartter Oil Company.  He later farmed west of Hiawatha for several years.  Earl then became a member of the Kansas Highway Patrol serving as an Examiner, Trooper and Sergeant in Pittsburg, the Kansas City area, the Kansas Turnpike, again the Kansas City area Johnson, Wyandotte, Leavenworth and Miami Counties.  After retiring from the Patrol in 1981 he was employed in the Johnson County Kansas Appraisers Office retiring in 1988 as Chief Deputy of Commercial & Personal Property.

During his working years he was a Charter member of the Kansas City Area Major Case Squad, a Graduate of the F.B.I. National Academy, a District Governor of the Kansas Peace Officers Association, a Master Mason, a Scottish Rite Mason, an Abdallah Shriner, Legionnaire, and Life Member of the Veterans of Foreign Wars.  He attended Heartland Honor Flight for WWII veterans October 2013. Earl enjoyed camping and the outdoors with his wife and children.  For several years after retirement, Earl and LaVonne enjoyed traveling in their motorhome to Alaska, the lower 48 states, Prince Edward Island and Nova Scotia.

He was preceded in death by his parents; his brother, George Hartter; his grandson, Daniel Franco; and his sister, Mildred Gillispie.

Funeral service will be Monday, February 26, 2018 at 10:30 a.m. at the Apostolic Christian Church in Sabetha, KS. Visitation will be held Sunday, February 25, 2018 from 2:00 p.m. to 4:00 p.m. at the Popkess Mortuary Chapel in Sabetha.  Interment will be made in the Sabetha Cemetery with military honors conducted by the Sabetha V.F.W. Post #7285.  In lieu of flowers, the family requests that memorial contributions be made to the Myasthenia Gravis Foundation or the Apostolic Christian Home, sent in care of Popkess Mortuary, 823 Virginia, Sabetha, Kansas 66534.

To order memorial trees or send flowers to the family in memory of Earl Hartter, please visit our flower store.