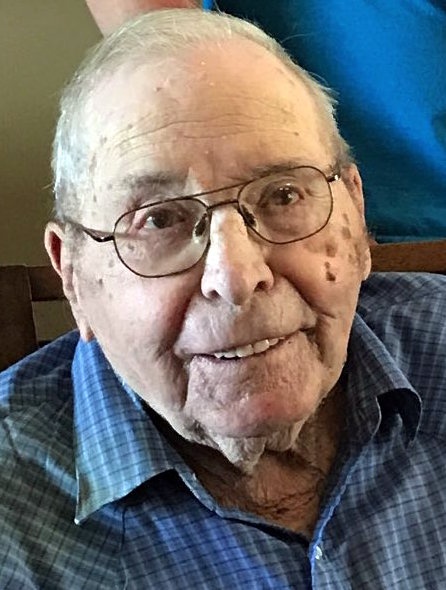 Edward was born January 6, 1920, on a farm near Ontario, Kansas, the son of Fred and Carrie (Karns) Pfrang.  He graduated from Bancroft High School.  He was in the Army during World War II, and served with the 400th Coast Artillery Battalion from 1942 – 1945, for 39 months, which included stays in North Africa, Sicily, Italy, Corsica, France, and Belgium.

On February 9, 1949, Edward married Eldred Lela Zwahl, whom he met after receiving letters from her during the war.  They made their home south of Oneida, till moving to Medicalodges in Holton, March 2018.  Edward was a livestock man and farmer all his life.  He was a Director at the First National Bank in Goff for many years.

Ed loved to farm, raise cattle, tell stories, and had immense love and pride of his family.  He continued to be involved with farming – and even last fall he could often be found riding in trucks, tractors, or combines, sharing his love of farming with his family.  He was preceded in death by his parents, Fred and Carrie Pfrang; a brother, Lloyd Pfrang and a sister, Anna Pfrang.

Funeral services will be held on Thursday, June 28, 2018 at 11:00 a.m. at the Popkess Mortuary Chapel in Sabetha. A visitation will be from 10:00 a.m. until service time at the funeral home.  Interment will be made at the Wetmore Cemetery with military honors.  Memorial contributions may be made to the Quilts in the Courtyard - Quilts of Valor program, sent in care of Popkess Mortuary, 823 Virginia, Sabetha, Kansas  66534.

To order memorial trees or send flowers to the family in memory of Edward Pfrang, please visit our flower store.