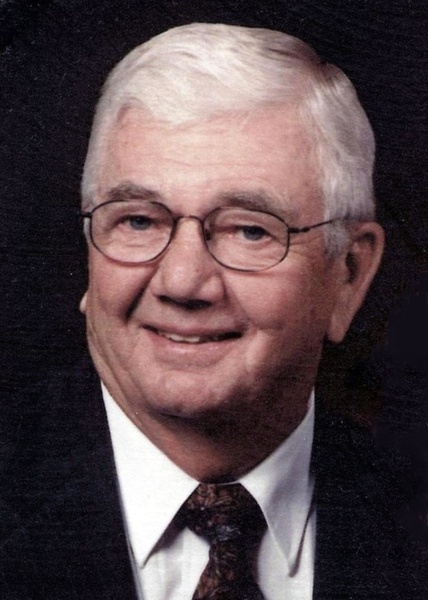 He was born September 26, 1924 to Charles and Lillian Mae (Church) Montgomery at the farm home in the Berwick community northwest of Sabetha.  He attended Excelsior country school, and graduated from Sabetha High School with the class of 1942.  He attended Kansas State University briefly, and while there was a member of the Farmhouse Fraternity.  He then returned to the family farm and worked with his father for the next several years.

He married Leota Strahm on February 15, 1948, and together they made their home in the Berwick community.  To this union was born three children, Ann, Jay, and Ross.   Ed was a lifelong farmer and stockman.  A dairyman for many years, he and Leota established Leeds Farm registered dairy herd.

While dairying, Ed and Leota received the Balanced Farming and Family Living Award from the Kansas Bankers Association as well as other numerous DHIA awards.  After the dairy herd was sold in 1973, he then fed beef cattle and hogs and continued his row crop operation.

Ed's life centered around faith, family, and farming.  He was a lifelong member of the First Congregational Church and NorthRidge Church in Sabetha where he served as trustee, deacon, and missions committee member, was a Sunday School teacher for many years and was a member of Gideons Inernational.  He was a member of The Dairy Herd Improvement Association and served as president of the DHIA.  He served on the board of the Nemaha County Creamery, a predecessor of the Mid-American Dairymen Creamery in Sabetha, and was a member of the Nemaha County Farm Bureau.  Ed enjoyed reading, traveled extensively, and became a licensed private pilot and a member of the Sabetha Flying Club.  He treasured family gatherings and his children, grandchildren, and great-grandchildren.

He was preceded in death by his parents, Charles and Mae (Church) Montgomery; and sisters, Dottie Smith and Margie Dillaplain.

To order memorial trees or send flowers to the family in memory of Edwin Montgomery, please visit our flower store.